The Town That Never Was

Each year, steampunks in the UK gather at The Town That Never Was, a place where the Cthulhu Party rules, the 3rd Foot & Mouth regiment stands guard, and the Martian Expeditionary Force seeks recruits. We have photos to prove it.

Vintage trains and timepieces are icons of steampunk, and now a company in Connecticut has combined the two in Gauge Master, a series of watches that incorporate elements of historic locomotives. 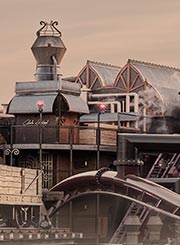 A Visual Tour of Rookburgh

Here’s a new entry for your steampunk bucket list, at least when international travel restrictions are lifted. Rookburgh is a steampunk-styled area that recently opened at PhantasiaLand, a theme park in Brühl, Germany, near Cologne.

Distilleries and breweries inherently have a steampunk look. We have the photos to prove it.

Some places go to great expense to adopt steampunk designs — think Toothsome Chocolate Emporium in Orlando or Enigma Café in Cluj-Napoca, Romania. But if you’re a distillery or brewery, you can be steampunk without really trying.

The World of Steampunk

See the astonishing costumes. Marvel at the mystifying inventions. Brave the hair-raising adventures. Witness the bizarre tea rituals. We have all this and more in a free online exhibition. 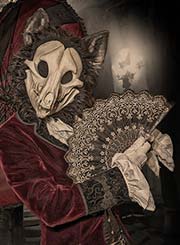 A Look at Gallery Ex Machina

If you happen to be in Barcelona, here’s a new attraction you might want to put on your itinerary. Gallery Ex Machina will exhibit “technology-themed artwork, mostly in the steampunk and cyberpunk styles whenever possible,” its manager says.

Steampunk in the Land of Dracula

Cluj-Napoca, the largest city in Transylvania, is home to eye-catching steampunk eateries

Photo Gallery: Cluj-Napoca is the unofficial capital of Transylvania, the region known for its association with Bram Stoker’s Dracula. But the Romanian city is also a haven for steampunk-themed eating and drinking establishments.

Photo Gallery: Steampunk is meeting the ocean depths — or at least a reasonable facsimile — at Seapunk: Powered by Imagination, a new exhibit at the Oregon Coast Aquarium in Newport. It opened on May 25 and runs through December 2020.