Each month, The Steampunk Explorer produces a guide to steampunk-related movies and TV series that are slated to arrive on major streaming services. But most of the top streamers offer other steampunk programming beyond the new arrivals.

The tagline for our April Fool’s parody: “Your Guide to Better Living, The Tesla Way”

April 1 is here, and we’ve continued our tradition of publishing a steampunk-themed parody. This time, it’s T: The Tesla Magazine. Nikola Tesla occupies a hallowed place in steampunk, and if Oprah deserves a magazine of her own, then so does “T.”

An Early Look at The Nevers

Steampunk fans have been eagerly anticipating The Nevers, the new HBO series about the “Touched,” a group of (mostly) women in Victorian London with unusual powers. Here’s a look at scenes from Season 1.

Icons of History, Icons of Steampunk

A look at sixteen historical figures who are steampunk inspirations, or maybe should be

Now it can be revealed: The identities of the historical figures in our new social media banner. Most lived their entire lives in the 19th century, and each was prominent in some way, as an author, artist, social reformer, or head of state.

A Steampunk Guide to Punching Hitler

Some musings on steampunk etiquette while traveling on the information superhighway

Professor Elemental shared a picture of Hitler being punched in the face and was surprised at the response. This inspired him to offer pointers for “taking a stand [and] making your voice heard, while also holding onto your sanity.” 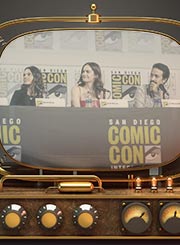 [email protected] promises a packed schedule, including many panels with steampunk appeal

Comic-Con International has announced the program schedule and other details for Comic-Con@Home, and it appears to be one of the most ambitious efforts to produce a virtual convention in the era of COVID-19. It all happens July 22-26.

From Antebellum to Sherlock Holmes, another look at upcoming films likely to have steampunk appeal

When we ran our 2020 movie preview in January, little did we know that a pandemic would wipe out the best-laid plans of the entertainment business. Here’s an updated look at new movies likely to draw interest from steampunk fans.

A Big Month for Steampunk Games

From Airborne Kingdom to Torchlight III, here’s a look at forthcoming steampunk titles

June is typically a big month for video game announcements thanks to the Electronic Entertainment Expo. E3 was cancelled this year due to the pandemic, but that didn’t keep developers and publishers from announcing new steampunk games.

Another bold new publishing venture from The Steampunk Explorer, just in time for April 1

Once again, The Steampunk Explorer is using the first day of April to launch a new publication. Last year, it was the Steampunk Enquirer. This time, we give you COGSmopolitan. Rest assured, it’s not coming to a newsstand near you.