Photo Gallery: The Ohio Valley Art League in Henderson, Kentucky, is hosting Steampunk’d, a juried exhibition of steampunk works that runs through Jan. 4. It features 19 pieces by 12 artists, including 2D and 3D works in a variety of media.

A Call for Makers in Waltham

The Watch City Steampunk Festival is seeking entries for a “Mad Science Exhibition” at next year’s event. “Competitors will submit an ‘invention’ in the form of a contraption, construct, or kinetic sculpture,” the organizers say. 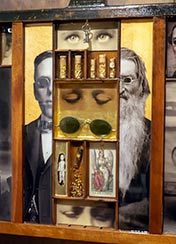 Steampunk enthusiasts can step into an alternate universe of eerie Victorian characters as Art Works Downtown in San Rafael, California, hosts “Curiously Grim,” an exhibit featuring the work of Eric Kelly. It runs through October 6. 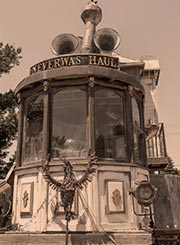 The Obtainium Works Art Car Jam, held July 21 in Vallejo, California, was a showcase for wild and whimsical mobile contraptions, many with steampunk appeal. The event was a warmup for the Obtainium Cup rally on Sunday.

Whether by land, sea or airship, steampunks have good reason to travel to Southern California this summer and fall as the San Diego Automotive Museum hosts “Steampunk with a Retro Twist,” an exhibition that runs through October 7.

Steampunk at the Farmers' Market

Most people go to farmers’ markets for deals on fresh produce, but at the one in Flint, Michigan, you can find Heather Wright selling her handmade steampunk jewelry. Her creations recently caught the eye of Michigan Radio.

Steampunk has long played a role at Maker Faire Bay Area, the huge annual gathering of inventors, tinkerers and do-it-yourselfers. The genre had a lower profile in 2018, but Maker Faire was still a showcase for notable steampunk creations.

One benefit of attending Maker Faire Bay Area is that you get to see large-scale Burning Man projects without the need to trek to Black Rock Desert. Some have become steampunk icons. This is Part One of our Maker Faire coverage.