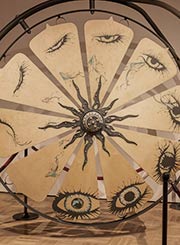 The Steampunk Art of Burning Man

Art first seen in Black Rock Desert lives on in other places, including an exhibition in Oakland

Photo Gallery: Burning Man is known for its spectacular art installations, but you don’t have to spend a week in the desert to see these projects. Here’s a look at places in California and beyond where Burning Man art is on display.

Google employees will get daily glimpses of steampunk creativity thanks to an art exhibit portraying 19th century authors and inventors as mechanical comic book superheroes. The artwork is based on Bruce Rosenbaum’s Humachines.

A Look at Gallery Ex Machina

If you happen to be in Barcelona, here’s a new attraction you might want to put on your itinerary. Gallery Ex Machina will exhibit “technology-themed artwork, mostly in the steampunk and cyberpunk styles whenever possible,” its manager says.

How to Make an Art Car

Steampunk fans in the San Francisco area received a master class in “How to Make an Art Car” during a presentation Aug. 3 at the Obtainium Works studio in Vallejo, California. They were joined by a group of engineering students from China.

A maker of cigar-box guitars in Victoria, Australia falls under the spell of steampunk

Photo Gallery: One of the pleasures of producing The Steampunk Explorer is that we get to hear from steampunk creators around the world. One of them was Greg McKinnon, a musician and guitar-maker from Geelong, a city in Victoria, Australia.

A family airship, steampunk flying saucer and other artistic vehicles take to the streets

Obtainium Works is one of the premier art groups in the steampunk world. If you attend an event where they have a presence, chances are that you’ll see Stephen Jacobson with camera in hand. Here’s a look at some of his photos.

Maker Media, the company behind Maker Faire and Make magazine, has ceased operations. The news was reported late Friday by TechCrunch, which confirmed it with founder/CEO Dale Dougherty.

A personal home décor project became a paying hobby for an artist in Helena, Montana

Some artists work in wood, clay, or bronze. But like many other steampunk makers, Don Reich works with parts you might find in an antique shop or salvage yard: pipes, gauges, valves, fans, even an old Dictaphone or sewing machine.

Tens of thousands braved rainy weather for Maker Faire Bay Area, a festival of DIY ingenuity that’s been dubbed the “Greatest Show and Tell on Earth.” It was a showcase for a wide range of creative projects, including many with steampunk appeal.