The Steampunk Art of Stephen Barnwell

At first glance, the Aurora Airship Company stock certificate might seem authentic. Then you realize that the airship is like nothing that ever existed in our world, and you might notice that the certificate bears the stamp of the Nadiria Stock Exchange.

A Taste of Burning Man in Vallejo

Fire-spewing mechanical creatures might seem a better fit for Halloween than a Winter holiday celebration, but no one seemed to mind as the Mad Hatter Holiday Festival and Parade returned Dec. 4 to Vallejo, California after a one-year hiatus.

A Steampunk Haven in Miniature

Steampunk makers Lord and Lady Towers have gained a reputation for large-scale art projects such as D.I.N.O., their life-size mechanical dinosaur. But their latest magnum opus is a kinetic sculpture that’s the size and shape of a top hat.

Readers of The Steampunk Explorer are likely familiar with the work of Eric Kelly, who transforms Victorian-era photographs into surreal portraits and dreamscapes. It got a recent showing in San Rafael, California. 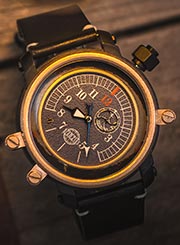 Vintage trains and timepieces are icons of steampunk, and now a company in Connecticut has combined the two in Gauge Master, a series of watches that incorporate elements of historic locomotives.