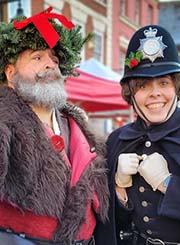 Cosplay at the Steampunk and Dickensian Christmas Market in Nottinghamshire, UK

Steampunk met the world of Charles Dickens at the Steampunk and Dickensian Christmas Market in Newark, UK. The event featured traders, a torchlight procession, live music, and cosplayers in all their steampunk glory.

Steampunks set their sights on the stars as the National Space Centre in Leicester, UK once again hosted Steampunks in Space. The event featured an art exhibition, authors/artists alley, a steampunk market, and lots of cosplay. 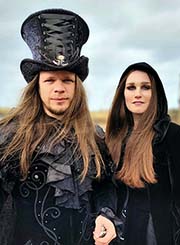 Twice a year, Whitby Goth Weekend draws hundreds to the North Yorkshire seaside town known for its association with Bram Stoker’s Dracula. Many show up for the live music and artisan markets, but cosplay is also a big part of the allure.

Haworth Steampunk Weekend returned Oct. 8-9 to the historic village in West Yorkshire, UK, and once again, costumed steampunk fans filled the cobblestoned Main Street. The event serves as a fundraiser for the Sue Ryder Manorlands Hospice.

Scenes from the Gaslight Steampunk Expo, where cosplayers embodied the Halloween spirit

The event, held at an open-air history museum, once again showcased spectacular cosplay

Anno 1900, a steampunk convention held at Minett Park Fond-de-Gras in Pétange, Luxembourg, has traditionally been a visual feast for cosplay fans. This is especially true given the setting, an open-air history museum with its own railway station.

Scenes from the Asylum

Once again, the huge steampunk gathering was a feast of imaginative cosplay

By most accounts, it’s the largest steampunk gathering on Planet Earth. It’s so big that we asked two of our past contributors, Craig Jenkins and Stephen Bell, if they’d allow us to use some of their photos. Both kindly obliged.