The event featured Old West historical exhibits and re-enactments, along with live music and steampunk vendors. Placerville was known as “Hangtown” during the Gold Rush due to local residents’ notorious use of frontier justice.

The steampunk fest was back in Central Illinois with costumes, Nerf dueling, and lots more

Cogs & Corsets returned June 3 and 4 to downtown Bloomington, Illinois, and once again our correspondent was there was camera in hand to capture the cosplay and other festivities.

The Time Traveler’s Convention Spring Faire took place May 20-22 in Quincy, Illinois, and though a rainstorm reduced attendance, our correspondent reported that it was a promising start to what he hopes will be a recurring annual event. 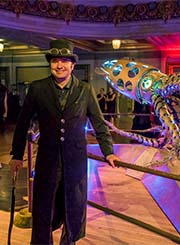 Scenes from The Edwardian Ball

Hundreds of costumed revelers turned out April 1 and 2 for music, art, circus acts, and more. The Ball serves as a tribute to writer and illustrator Edward Gorey, and each night culminated with a stage adaptation of Gorey’s The Wuggly Ump.

The costume designs of Kij Greenwood have long been highlights of Clockwork Alchemy, the San Francisco area steampunk convention. But this year’s gathering provided a bigger stage for her work during a fashion show on Saturday afternoon.

UK steampunk fans flocked to the North Yorkshire coast for Whitby Steampunk Weekend, held Feb. 11-13 at the Whitby Pavilion and other venues. Lucky for us, our guest contributor Craig Jenkins was also there and kindly allowed use of his work.

The Steampunk Art of Stephen Barnwell

At first glance, the Aurora Airship Company stock certificate might seem authentic. Then you realize that the airship is like nothing that ever existed in our world, and you might notice that the certificate bears the stamp of the Nadiria Stock Exchange.

After a year or so of pandemic-induced restrictions, steampunk gatherings in 2021 slowly returned to the real world, and it was clear from the enthusiasm surrounding the events that folks were eager to meet again in person. See the highlights in our gallery.