Professor Elemental and Victor Ghastly have collaborated on a new EP while Unwoman unveiled an EP of holiday tunes and Madam Misfit released a new music video from her album Pandora's Box.

Music acts that cater to steampunk fans have been busy lately, with new releases from Frenchy and the Punk, Fate Gear, and Unwoman, while Madam Misfit’s second album is waiting in the wings. Here’s a roundup.

The band is joined by a cast of guest vocalists who help tell a story set in the far future and late 19th century Northern California. It’s available now as a CD and MP3 download from the band’s website.

New Music From Victor and the Bully, Fate Gear, Mr. B, CPYist, Unwoman

It’s been a busy couple of weeks for musical acts that cater to steampunk fans, with new releases from Victor and the Bully, Fate Gear, Mr. B The Gentleman Rhymer, and CPYist, while Unwoman is taking pre-orders for her latest album of cover songs.

Their seventh full-length album will consist of 10 new original songs. “We’re picking out more of that dark mystical vibe,” says Samantha Stephenson. It’s set for delivery in July as a CD and digital download.

Steampunk Bands Speak Out About Russian Invasion of Ukraine

Steampunk might be about imaginary worlds and pasts that never were, but sometimes reality intrudes. As Russia continues its invasion of Ukraine, several top musical acts in the steampunk world have taken a stand. 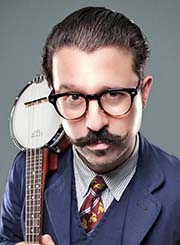