The costume designs of Kij Greenwood have long been highlights of Clockwork Alchemy, the San Francisco area steampunk convention. But this year’s gathering provided a bigger stage for her work during a fashion show on Saturday afternoon.

Clockwork Alchemy Heads to the Aether This Weekend for Virtual Event

The organizers of Clockwork Alchemy have posted the schedule and other details for Transmissions from the Aether, which takes place Saturday and Sunday. It will feature a mix of live sessions on Zoom and pre-recorded presentations on Twitch.

The COVID-19 outbreak continues to wreak havoc, sweeping up much of the steampunk community along with geek culture in general. 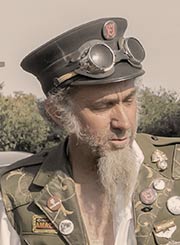 Marvelous Makers to Converge in SF

Update: Clockwork Alchemy, the San Francisco-area steampunk convention originally scheduled for March 20-22, has been postponed to 2021. This is due to public health orders banning large gatherings in response to the COVID-19 outbreak.

Ten authors, and some readers, suggest more locations for your steampunk bucket list

Photo Gallery: Last year, we asked 10 authors to suggest their top travel destinations for steampunk enthusiasts. The result was a “Steampunk World Tour” that proved to be one of our most popular stories. So we decided to do a sequel.

One attraction of any steampunk convention is the sight of attendees wearing fanciful costumes, and Clockwork Alchemy was no exception. Some of the most elegant outfits were seen in the fashion show, but that was just the beginning.

One of the big attractions at Clockwork Alchemy is the Artists Gallery, a space devoted to steampunk gadgets, props, costumes, paintings and other artwork. This year’s gallery seemed to raise the bar from previous conventions. . .

Steampunk is a multi-faceted subculture — art, crafts, music, literature, cosplay, and more — and all were on display at Clockwork Alchemy 2019, held March 22-24 in Burlingame, California.

See Us at Clockwork Alchemy 2019

The Steampunk Explorer will have an active role at Clockwork Alchemy 2019, which takes place March 22-24 at the Hyatt Regency SFO in Burlingame, California. Editor Stephen Beale is scheduled for three presentations.

A California couple makes "re-fabricated finery for the fashionable adventurer"

After corporate downsizing left David Berry out of work, he and wife Maria embarked on a new venture making robot taxidermy, quick-draw tea cups, and other creations seen at steampunk events.