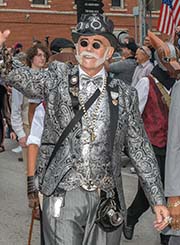 The Time Traveler’s Convention Spring Faire took place May 20-22 in Quincy, Illinois, and though a rainstorm reduced attendance, our correspondent reported that it was a promising start to what he hopes will be a recurring annual event.

The Time Travelers Convention Spring Faire is scheduled for May 20-22 in Quincy’s Clat Adams Park, along with nearby indoor venues. Big River organizer Tammy Riley received a grant from the city to fund the new event.

After a year or so of pandemic-induced restrictions, steampunk gatherings in 2021 slowly returned to the real world, and it was clear from the enthusiasm surrounding the events that folks were eager to meet again in person. See the highlights in our gallery.

Steampunk fans once again flocked to Hannibal, Missouri for the annual gathering

The Big River Steampunk Festival returned over Labor Day Weekend with a new owner and questions about whether it would be as big and spectacular as past gatherings. Our correspondent has a report and photos.

The festival, one of the largest steampunk gatherings in the U.S., is under new ownership this year. Visitors can expect a varied program with a steampunk parade, live entertainment, costume contests, and more.

Steampunk Events Come Back to the Real World

Steampunk fans are looking forward to resumption of live events. Here’s how the calendar is shaping up, including plans for the Big River Steampunk Festival, Cogs & Corsets, Whitby Steampunk Weekend, and more.

Hannibal restauranteur Tammy Riley is the new owner of the Big River Steampunk Festival after co-founders Ken and Lisa Marks moved to Delaware. Next year’s event is on for Labor Day weekend with a time-travel theme.

The Big River Steampunk Festival in Missouri is the latest steampunk event to cancel due to COVID-19. Held over Labor Day Weekend, it’s one of the largest steampunk gatherings in the U.S. “The virus wins... this round,” the organizers said.

The Hannibal History Museum in Missouri will remain open, thanks to an anonymous donation. The museum is led by the founders of the Big River Steampunk Festival.

Mark Twain and Nikola Tesla are characters in a new comic book created as a promotion for the Big River Comic Convention. And a new UC Berkeley project explores Twain’s real-life friendship with the inventor.

Thousands took to the streets of Hannibal, Missouri for the sixth annual Big River Steampunk Festival. Among them was photographer Curt Knapp, who provided photos and sent us his impressions.