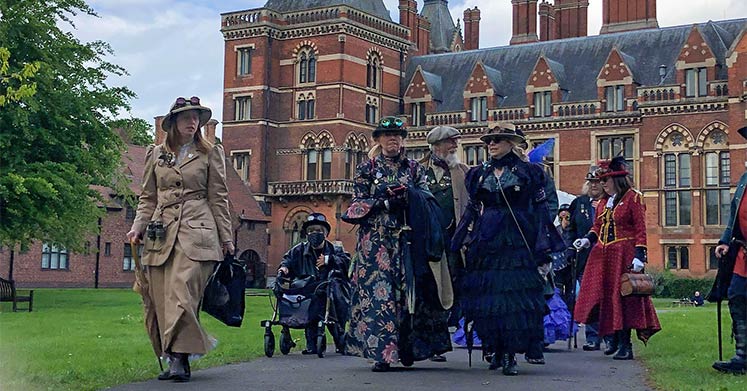 Attendees at Sanctuary II, held at Kelham Hall in May. Photo: John Naylor, Ministry of Steampunk

Disappointing news from the UK. The Ministry of Steampunk announced Sunday that the Asylum Steampunk Festival will not be happening in 2021. Festival director John Naylor revealed the news in a post on the Welcome to the Asylum Facebook page.

The festival hit a roadblock in late June when the company that operated Kelham Hall, the main venue, shut its doors. The property is now controlled by the mortgage holders, who were unwilling to host the event. The Ministry’s efforts to find a new venue also came to naught.

Ticketholders for this year’s festival will receive refunds in the coming weeks, Naylor stated. And he held out the possibility of a smaller event in Newark-on-Trent.

The Asylum Steampunk Festival is the world’s largest steampunk gathering. Past events have drawn an estimated 100,000 visitors.

Read the full story: Asylum Steampunk Festival is cancelled for 2021

Despite the setback at Kelham Hall, the Ministry of Steampunk is going ahead with The Town That Never Was, scheduled for July 17-18 at Blists Hill Victorian Town in Telford. The program includes a parade along with immersive games, belly dancing, photo shoots, nerf dueling, a curated market, maker exhibition, and live music by The Undeserving Poor.

Blists Hill is an open-air museum that re-creates a Victorian-era town.

The hosts are requiring advance tickets with timed entry to reduce crowding at the entrance. Learn more on the website and Facebook page.

Steampunk fans in the Chicago and Milwaukee areas will be heading to Kenosha, Wisconsin July 17-18 as the Bristol Renaissance Faire hosts a Steampunk Weekend. Activities will include a contest each day recognizing the best handmade costumes.

The Chicagoland Steampunk Society is having a meetup there on Saturday at 3 p.m. CT, following judging for that day’s costume contest. They’ll meet at the Maypole.

This is one of two themed weekends at the Faire, the other being Pirate Weekend Aug. 7-8. The Faire runs through Sept. 6. The organizers caution that they’ve made changes this year to comply with public health guidelines. See the website for more info.

The program for Dragon Con is shaping up as the organizers announced that Marquis of Vaudeville, Valentine Wolfe, Jess-O-Lantern, and The Cybertronic Spree will take the stage at the geek culture event. They’ve also announced a slate of celebrities, authors, and artists who will appear, including many cast members from Battlestar Galactica.

They expect a much smaller turnout in 2021 due to the pandemic, and plan to offer online programming to accompany the in-person convention. Streaming memberships will cost $10.

The Alternate & Historical Fiction track is home to most of the steampunk programming, and organizers of that track say they’ll post information about the schedule in August.

The convention is set to take place Sept. 2-6 with five downtown Atlanta hotels serving as venues.

Steampunk fans in the UK gathered last weekend at two historic venues in England’s East Midlands region: The Papplewick Pumping Station in Nottingham and Chatsworth House in Derbyshire. As with many steampunk events, the attendees themselves were major attractions with their imaginative outfits.

Fortunately for us (and our readers), photographers were on hand to capture the memories, and two of them — Steven Screen at Papplewick and Anthony J. Hill at Chatsworth — kindly granted permission to use their work.

These roundups can serve as crystal balls for future books, comics, games, and music. And if you’re considering your own Kickstarter campaign, you can get an idea of which ones are most likely to succeed.

The latest installment covers campaigns that concluded in April, May, and June. The big winner was Renegade Game Studios, which raised more than US$900,000 for My Father’s Work, a gothic horror board game.

Curious about past Kickstarter campaigns? Thanks to our magic Editorial Time Machine (otherwise known as the Date setting in our content management system), we’ve retroactively posted Kickstarter roundups going back to 2018:

Professor Elemental and Mister Frisbee are out with “Nothing Says Cool (like a middle aged man),” a new music video from their latest album Good Dad Club. This isn’t the steampunk Professor Elemental, so here he’s known simply as “Elemental.” He describes the video as “a nightmare of everything I never want to be.”

It begins with the Professor taking a nap. Then he’s wearing street clothes, driving a red Audi, and walking along Brighton Beach (the one in the UK, not Brooklyn). The dream takes a nightmarish turn as we see the depths of his character’s mid-life crisis.

The single and album are available on the new Elemental Bandcamp page, and you can also order the album from the Professor’s website.

We are sad to report that Celine Collins, owner of Monkey Wrench Clothing in Kansas City, Missouri, passed away on July 4. Her family posted the news on the store’s Facebook page, where you can also find tributes from friends and patrons.

In her Twitter profile, Collins described herself as a “Steampunk and Pin-up Clothing Goddess.” Her store’s motto, she wrote, was “‘Release Your Inner Bombshell,’ because every woman, of every size and every age, has one.”

Reader Debra Kaye Campbell, who alerted us to the news, said Collins was “a force in the steampunk community in that part of the world.”

Collins’ family has decided to liquidate the store’s inventory and has posted an ad on Craigslist. The store, located at 312 Westport Rd. in Kansas City’s Westport neighborhood, will be open from 11 a.m. to 4 p.m. on July 18, July 25, and Aug. 1. 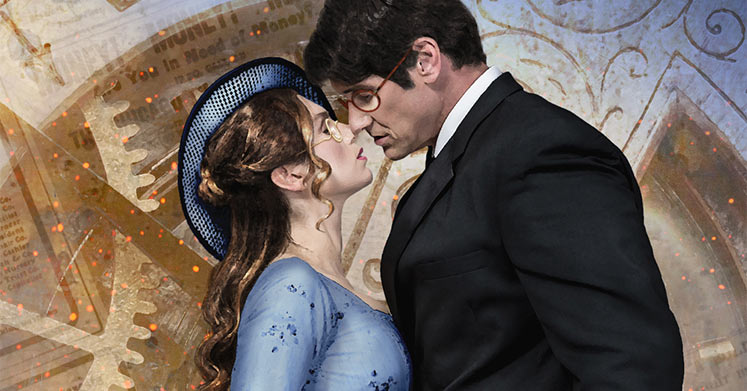 Catherine Stein has released Dead Dukes Tell No Tales, Book 3 in her Sass and Steam series of steampunk romance novels. This one follows the adventures of Clifford Kinsley, a scrap metal mogul and single dad who inherits an unwanted dukedom. Saddled with debt and seeking to escape his new title, he teams with next-door neighbor Sabine Diebin on a worldwide treasure hunt. Sabine happens to be an infamous airship pirate.

Smashwords, one of the top e-book marketplaces, is having a site-wide sale for the month of July, with titles available for 25% to 100% off (as in free). The site has a section for steampunk and retropunk works, where you can get deals on books from Alex Acks, Stephen Palmer, Madeleine Holly-Rosing, David Lee Summers, and many more.

Speaking of books, we’ve launched yet another new feature: Periodic book roundups. The latest has releases from June, including titles by Gail Carriger, Jeannie Lin, Jessica Lucci, Patricia Loofbourrow, R.J. Metcalf, Anne Renwick, and William LJ Galaini. You can follow all our book news thanks to this handy Books tag.

Meg Louise Art and The Bitter Season, a pair of solo artisan shops in the western U.S., are raising Kickstarter funds for a collection of hard enamel pins with Victorian gothic themes. They’ve created three designs, dubbed the “Lantern,” “Victorian Hand” and “Moon Moth.” They’ll produce one, two, or all three depending on how much they raise.

They’ve already passed their initial US$500 goal, so the Lantern is a go. They’ll unlock the Victorian Hand if they reach the first stretch goal of US$900. The Moon Moth unlocks at US$1300.

Each design measures 1.25 inches. The pins will feature silver plating and rubber backing. Pledges for the Lantern start at $8. A pledge of $18 or more will get you the Lantern and Victorian Hand connected by a silver-plated chain, if the artists meet the first stretch goal.

They expect to ship the pins in October. Due to VAT changes, they say they can’t ship to the UK or EU through the Kickstarter campaign. However, they say limited quantities will be available on Etsy for overseas customers after the campaign has ended.

The campaign launched July 10 and runs through August 6. See the Kickstarter page for more info. Also check out their Etsy shops: Meg Louise Art and The Bitter Season.

Final Fantasy Vs. Dragon Quest: Which Legendary JRPG Series Is Right for You? (CBR)

“The Amazing American Circus” Gets Delayed Another Month (Worthplaying)

A Complete Guide to Toothsome Chocolate Emporium (Inside the Magic)

Brewery Spotlight: Megaton Brewery in Kingwood (365 Things to Do in Houston)

So You Want To See Victorian London: Use This Guide To Plan Your Trip (The Travel)

We Used to Photograph the Dead (Elemental)

Clever Hans: The Horse That Scientists Believed Could Speak German And Do Math (IFL Science)

With the Borden Murder House in New Hands, Will Real History Get the Hatchet? (Smithsonian Magazine)

Podcast: How Octopuses Upend What We Know About Ourselves (The New York Times)

Did a Cuttlefish Write This? (The New York Times)