Unwoman (aka Erica Mulkey) is a classically trained cellist-singer-songwriter.

She has performed at major steampunk, goth, and sci-fi events across the U.S., including TeslaCon, Dragon Con, Worldcon, and Clockwork Alchemy. During her shows, she's known for her live-looping accompaniment on electric cello.

She has collaborated with Abney Park, Rasputina, Aurelio Voltaire, and others, and was featured in Vintage Tomorrows, a documentary about steampunk.

Professor Elemental and Victor Ghastly have collaborated on a new EP while Unwoman unveiled an EP of holiday tunes and Madam Misfit released a new music video from her album Pandora's Box.

New Music From Victor and the Bully, Fate Gear, Mr. B, CPYist, Unwoman

It’s been a busy couple of weeks for musical acts that cater to steampunk fans, with new releases from Victor and the Bully, Fate Gear, Mr. B The Gentleman Rhymer, and CPYist, while Unwoman is taking pre-orders for her latest album of cover songs. 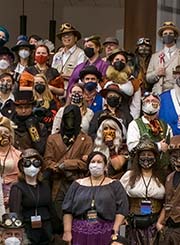 Unwoman is collaborating with Klingon Pop Warrior on a new EP of cover tunes sung in Klingon, with proceeds going to charities. Meanwhile, Insymmetry Creations is crowdfunding a new Heirs of Isildur installment.

It’s time once again for a look at successful Kickstarter campaigns from recent months. They included three projects that raised six-figure sums: The Girl Genius RPG from Steve Jackson Games, Lady Mechanika: The Monster of the Ministry of Hell #1 from Joe Benitez, and City of the Great Machine from CrowD Games.

Steampunk Bands Get in the Halloween Spirit With Seasonal Releases

They include symphonic gothic metal from Valentine Wolfe, a nautically themed number from Ghostfire, and an electro-swing collaboration by Madam Misfit and Victor and the Bully, plus Unwoman’s terrifying take on Dolly Parton’s “Jolene.”

Unwoman Crowdfunds for Dark Ambient Side Project ‘No Little Sparrow’

The new album is a follow-up to a 2016 release, which featured a mix of cello, vocals, and bird songs. She's also re-released her Untitled Scary EP featuring seven tracks with Halloween themes.

Ghostfire released “Neptune’s Call,” the second single in its recent comeback, while Unwoman is out with a cover of Halsey’s “The Tradition.” Also: Victor Sierra is set to release a new song in remembrance of the Sept. 11, 2001 NYC terrorist attacks.

Unwoman Releases Her Latest: ‘Of My Own Space and Time I Am Queen’

It’s her eighth album of original music. She describes it as her best yet, reflecting “decades of practice and thought.” It’s “a dark album but ultimately uplifting,” she adds.

Of My Own Space and Time I Am Queen will be Unwoman’s 14th album overall. She’s already surpassed her $6000 fundraising goal on Kickstarter. Backers will get it in July.

A New Album of Covers from Unwoman

The Love Apocalypse puts Unwoman’s stamp on 14 tracks fitting “with a subtle narrative of love and upheaval.” Tracks include Pat Benatar’s “Love is a Battlefield,” Siouxsie and the Banshees’ “Kiss Them For Me,” The Cure’s “Lovesong,” and Nine Inch Nails’ “Every Day is Exactly the Same.”

Untitled Scary EP includes covers and a Halloween-themed reworking of Dolly Parton’s “Jolene.” It passes on to the spirit world on Nov. 2.

The producer of the International Steampunk Symposium will debut a new event, the Chicago Steampunk Exposition, Sept. 27-29 at the Westin O’Hare Hotel. Attendees can expect a packed schedule of panels, games, musical performances, and more. 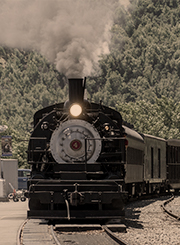 Steampunk on the Railway

The Silicon Valley Steam Festival debuted June 8 at the Sunol Depot of the Niles Canyon Railway in Northern California. The event featured live entertainment, plus steampunk vendors and rides on steam-powered trains. We have lots of photos.

Steampunk is a multi-faceted subculture — art, crafts, music, literature, cosplay, and more — and all were on display at Clockwork Alchemy 2019, held March 22-24 in Burlingame, California.

Unwoman, the self-described “anachrofuturistic electric cellist/singer-songwriter,” is out with Uncovered Volumes 4 & 5, a 2-CD set of cover songs. It includes her interpretations of tunes by David Bowie, Kate Bush, Talking Heads, and more.

’Tis the season for holiday music, and Unwoman and Valentine Wolfe are both out with treats for your aural pleasure.

Steampunk Tunes for the Holidays

A look at holiday-themed steampunk music, or is that steampunk-themed holiday music?

Many musicians have holiday songs in their repertoires, and steampunk artists are no exception. Here’s a roundup of tunes to help you get into the steampunk holiday spirit, including new offerings from Unwoman and Valentine Wolfe. . .