Obtainium Works is an art car studio in Vallejo, California. They describe themselves as a “group of tinkerers, gearheads, and steam bohemians who fabricate art out of repurposed industrial detritus. We call it ‘Obtainium.’”

Led by Shannon O’Hare, the group is best known for the Neverwas Haul, a three-story self-propelled Victorian house. Their work has been seen at Burning Man, Bay Area Maker Faire, and other events. They also host the Obtainium Cup Contraptor’s Rally in Vallejo and have an active presence in the Mad Hatter Holiday Parade and Festival.

Tours will be available every other Sunday at the Haul’s new temporary location in Vallejo, California. Obtainium Works, which created the steampunk icon, also revealed new details about this year’s Obtainium Cup Rally.

Though some steampunk fans have described the Haul as a “steampunk RV,” it was not designed to be habitable for overnight stays. That’s about to change as Obtainium Works plans to spend the next two years converting it into a tiny home.

A Taste of Burning Man in Vallejo

Fire-spewing mechanical creatures might seem a better fit for Halloween than a Winter holiday celebration, but no one seemed to mind as the Mad Hatter Holiday Festival and Parade returned Dec. 4 to Vallejo, California after a one-year hiatus.

After a year “down the rabbit hole,” the event returns Saturday to downtown Vallejo, California, featuring the steampunk-inspired art cars of Obtainium Works along with projects by other artists.

Steampunk is all about alternate histories, and Obtainium Works had fun with the concept on their brand-new YouTube channel. One video shows how they disassemble the Neverwas Haul. Another is from an alternate reality.

Gallery: The Neverwas Haul, one of the most celebrated steampunk creations, has undergone a restoration and has a new temporary home in Vallejo, Calif. The self-propelled Victorian house will be open for tours at least through late November.

Clockwork Alchemy Heads to the Aether This Weekend for Virtual Event

The organizers of Clockwork Alchemy have posted the schedule and other details for Transmissions from the Aether, which takes place Saturday and Sunday. It will feature a mix of live sessions on Zoom and pre-recorded presentations on Twitch. 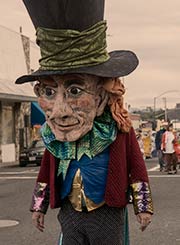 Scenes from the Mad Hatter Parade

Once again, whimsical art cars took to the streets of downtown Vallejo for the annual holiday fest

Bay Area steampunk fans got a taste of Burning Man as the Mad Hatter Holiday Festival and Parade returned to Vallejo, California. The event featured a procession of wacky art cars along with pyrotechnic sculptures and kinetic art.

How to Make an Art Car

Steampunk fans in the San Francisco area received a master class in “How to Make an Art Car” during a presentation Aug. 3 at the Obtainium Works studio in Vallejo, California. They were joined by a group of engineering students from China.

A family airship, steampunk flying saucer and other artistic vehicles take to the streets

Obtainium Works is one of the premier art groups in the steampunk world. If you attend an event where they have a presence, chances are that you’ll see Stephen Jacobson with camera in hand. Here’s a look at some of his photos.

Northern California fashion designer Judi Morales discovered steampunk at Burning Man. That led her to Obtanium Works in Vallejo and the Neverwas Haul

Tens of thousands braved rainy weather for Maker Faire Bay Area, a festival of DIY ingenuity that’s been dubbed the “Greatest Show and Tell on Earth.” It was a showcase for a wide range of creative projects, including many with steampunk appeal.

A Showcase for DIY Creativity

The world’s largest Maker Faire returns May 17-19 to the San Francisco Bay Area, offering a showcase for DIY invention and creativity in categories that include kinetic art, cosplay, robotics, 3D printing, vehicles, woodworking, needlecraft, and more.

Steampunk Vehicles in the Limelight

Imagine an auto showroom run by the Mad Hatter, and that will give you an idea of the scene inside the Temple Art Lofts Gallery in Vallejo, California, where the Victorian fantasy explorers of Obtainium Works have set up shop.

The tinkerers and “steam bohemians” of Obtainium Works will celebrate the group’s 7th anniversary with an exhibition slated for March 8-24 at the Temple Arts Loft Gallery in Vallejo, California. Many of the group’s art cars will be on display.

This whimsical parade is a holiday tradition in Vallejo, California, home of Obtainium Works

A “SteamPunk Santa” and his spiffy new sleigh were among the highlights of the 9th annual Mad Hatter Holiday Parade, held on Saturday, Dec. 1 in Vallejo, California. It was a holiday celebration like no other.

The “Rudolph 5000” was designed by Shannon O’Hare of Obtainium Works. Thomas Bilbo, aka the Steampunk Santa, plans to ride it in the city’s Mad Hatter Parade.

Jay Leno went steampunk in the latest episode of “Jay Leno’s Garage” on CNBC. He was joined by Doc Phineas, along with chap hop artist Poplock Holmes, Kathy and Shannon O’Hare of Obtainium Works, and designers Kimric Smythe and Baron Margo.

The Obtainium Works Art Car Jam, held July 21 in Vallejo, California, was a showcase for wild and whimsical mobile contraptions, many with steampunk appeal. The event was a warmup for the Obtainium Cup rally on Sunday.

Steampunk has long played a role at Maker Faire Bay Area, the huge annual gathering of inventors, tinkerers and do-it-yourselfers. The genre had a lower profile in 2018, but Maker Faire was still a showcase for notable steampunk creations.