Frenchy and the Punk

Frenchy and the Punk is a duo that frequently performs at steampunk events. “Frenchy” is singer Samantha Stephenson. “The Punk” is guitarist Scott Helland, who also performs solo as “Guitarmy of One.”

They describe their sound as follows: “Imagine Siouxsie Sioux and Dee Dee Ramone had a duo that was inspired by Django Reinhardt, Edith Piaf, Toulouse Lautrec and Deepak Chopra.”

They’re based in the Hudson Valley near New York City and can be seen at events all across the U.S. and in Canada. They also tour in Europe, where they have performed at shows such as the Asylum Steampunk Festival in the UK and Edinburgh Fringe Festival in Scotland, as well as events in France and Germany. They have also performed in West Africa.

Their mascot is a creature known as the Batfrog. They sell a line of Batfrogs-themed merchandise—and their music—online and at in-person events.

The Festival of Legends

Music acts that cater to steampunk fans have been busy lately, with new releases from Frenchy and the Punk, Fate Gear, and Unwoman, while Madam Misfit’s second album is waiting in the wings. Here’s a roundup. 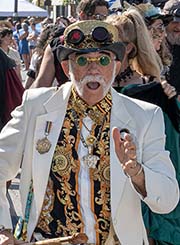 Musical entertainment includes Celtica Nova, Frenchy and the Punk, The Eternal Frontier, and A Halo Called Fred. Traditionally one of the largest steampunk gatherings in the U.S., it’s set for Saturday, May 7, in Waltham, Massachusetts.

Past events have been held indoors, but now it's set to take place June 4 at Vasa Park in Hackettstown, New Jersey. The music lineup includes A Halo Called Fred, Frenchy and the Punk, and This Way to the Egress.

The International Steampunk Symposium takes place March 25-27 in Cincinnati. It comes as founder Jason Dean is handing the reins of the convention to two local steampunk enthusiasts, Jennifer Noran and Michael Gruen.

Their seventh full-length album will consist of 10 new original songs. “We’re picking out more of that dark mystical vibe,” says Samantha Stephenson. It’s set for delivery in July as a CD and digital download.

Oddball Newt to Host Another “12 Months of Steampunk” in Connecticut

Oddball Newt, the event organizer in Connecticut, has announced plans for another “12 Months of Steampunk” in 2022, beginning with January’s Victorian Skate Fantasy followed by the Stupid Cupid Steampunk Ball in February.

New Music From Fate Gear, Frenchy and the Punk, The Cogkneys

New for your steampunk listening pleasure: Music videos from Frenchy and the Punk and Japan’s Fate Gear, plus a Halloween-themed EP from the UK music hall duo The Cogkneys.

This weekend’s calendar includes the first-ever Silk City Steampunk Festival in Manchester, Connecticut, and the Steampunk & Industrial Show in Mount Dora, Florida. Author Maurice Broaddus will be a special guest at Metaverse in Atlanta.

Is Steampunk Too Reliant on Facebook? Should We Seek Alternatives?

Steampunk may draw influences from the 19th century, but the steampunk community is highly dependent on one decidedly 21st century technology, and that’s Facebook. This point was driven home during a worldwide outage on Monday.

Wild released a video with accompaniment from Madam Misfit. Helland paid another homage to spy shows of the 1960s. And Catfish Comstock is out with “Steampunk Woman” from his new solo project Cyborg Assassins.

Dragon Con Is Happening This Weekend. Here’s a Steampunk Guide

Attendees can look forward to an extensive program of presentations covering all aspects of geek culture, including steampunk. If you can’t make it to Atlanta, this year’s convention will offer multiple tracks of virtual programming.

The long wait will soon be over for many steampunk fans eager to congregate in the eastern U.S., as three events are scheduled for this weekend: The Key City Steampunk Festival in Central Pennsylvania, the Southern Maine Steampunk Fair at the Brick Store Museum, and MegaCon in Orlando.

The organizers will also reduce room capacities, eliminate onsite membership sales, and limit the audience for the Dragon Con Parade. They expect attendance to be half that of earlier conventions. But they’re also offering streaming memberships.

Steampunks to Gather This Weekend in Connecticut and Wisconsin

Steampunk fans in and near Connecticut will converge Saturday for the Stupid Covid Steampunk Ball. Meanwhile, steampunks in the Wisconsin will mingle with geeks from other eras at Times of Future Past.

Professor Elemental and Frenchy and the Punk Announce 2021 Tour Dates

Key City Steampunk Festival Is Officially On for 2021

The organizers previously announced that they would hold off on selling tickets until they were sure they could run the convention within safety protocols. This year’s theme is “Cthulhu vs. The Martians.”

The Spy Detective Collective is a homage to spy and detective shows of the 1960s and 70s. Helland says his inspirations included The Prisoner, The Avengers, Columbo, Rockford Files, and Barnaby Jones.

Frenchy and the Punk Pine for Halloween in Latest Music Video

The duo got into the holiday spirit in their new video, but it might not be the holiday you’re thinking of. “Halloween for Christmas” is a track from their 2013 Cartwheels EP.

COGS STREAMPunk Spooktacular is happening this weekend with a program that includes musical performances from Frenchy and the Punk, Night Watch Paradox, and Steamcordia.

The online festival will include appearances by Frenchy and the Punk, The Eternal Frontier, A Halo Called Fred, and more. It replaces an in-person festival held annually in historic Belvidere, New Jersey.