Abney Park is a pioneering steampunk band founded in 1997 by Robert Brown, who is the lead singer and primary songwriter. At first it performed as a goth industrial band but adopted a steampunk style in 2005.

The band has created a backstory in which the members are airship pirates in a postapocalyptic world. In addition to its music, the band has released a series of novels and role-playing games.

Scenes from the Asylum

Once again, the huge steampunk gathering was a feast of imaginative cosplay

By most accounts, it’s the largest steampunk gathering on Planet Earth. It’s so big that we asked two of our past contributors, Craig Jenkins and Stephen Bell, if they’d allow us to use some of their photos. Both kindly obliged. 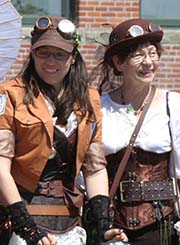 The steampunk calendar is tilting westward this weekend in the U.S., as the Brass Screw Consortium Steampunk Festival takes place in Port Townsend, Washington along with events in Northern and Southern California.

The band is joined by a cast of guest vocalists who help tell a story set in the far future and late 19th century Northern California. It’s available now as a CD and MP3 download from the band’s website.

Steampunk Bands Speak Out About Russian Invasion of Ukraine

Steampunk might be about imaginary worlds and pasts that never were, but sometimes reality intrudes. As Russia continues its invasion of Ukraine, several top musical acts in the steampunk world have taken a stand.

Three of the biggest names in steampunk music are out with new videos. Abney Park’s “Don’t Let Another Captain Captain Your Boat” is the first release from the band’s new album The Sub Aquatic Opera. The band is also planning a streaming concert.

It’s set for Aug. 7 at the Washington Midsummer Renaissance Faire in Bonney Lake, near Tacoma. The band is also planning a streaming concert for Aug. 21, and revealed more details about the Giants of Iron and Steam musical.

Band leader Robert Brown says Giants of Iron and Steam is being funded by a clean energy company near Sacramento. Meanwhile, the band is working on its next album, tentatively titled The Subaquatic Opera.

Technoshanties is described as “a collection of sea shanties, in Abney Park signature sound.” Concert options include access to a “seedy and disreputable” Drunken Pirate after-party.

The new album features 12 original tracks “with all your favorite Abney Park sounds and themes.” The band will celebrate with a streaming concert timed for European audiences.

Dragon Con is happening online, and steampunk fans will find lots of programming for their entertainment and edification. The schedule includes musical performances as well as steampunk-themed panels and workshops. Content will stream for free.

Poison Garden, a band from Italy, joined forces with other steampunk musicians to produce “Divided We Stand,” a single and music video that aims to raise funds for COVID-19 relief.

New Nostalgics features songs from the 1900’s through 1940’s “in a modern style.” The band also released a music video of “Beaten, Battered, and Abused” from the 2017 album Crash.

’Tis the season for holiday music, and Unwoman and Valentine Wolfe are both out with treats for your aural pleasure.

Steampunk Tunes for the Holidays

A look at holiday-themed steampunk music, or is that steampunk-themed holiday music?

Many musicians have holiday songs in their repertoires, and steampunk artists are no exception. Here’s a roundup of tunes to help you get into the steampunk holiday spirit, including new offerings from Unwoman and Valentine Wolfe. . .

Scallywag offers “tales of Automatons, and Scallywags, and Victorian Vigilantes, and Sea Captains,” the band said. The band funded the album on Indiegogo.