California's sixth-largest city has one of its most active steampunk communities. The Sacramento Steampunk Society, boasting more than 3000 members on its Facebook page, holds regular events in the area and has a major presence at Clockwork Alchemy, the annual Bay Area steampunk convention.

The city itself is the hub of a region steeped in Gold Rush history, and many historical sites related to that era are nearby. Being the state capital, Sacramento is also home to several museums of California history. Old Sacramento, featuring many restored 19th century buildings, is a major tourist attraction.

This section includes listings about these attractions along with articles about steampunks in the area. It covers the following counties: Amador, Calaveras, El Dorado, Nevada, Placer, Sacramento, San Joaquin, Sierra, Sutter, Yolo, and Yuba. The other major city in the region is Stockton in San Joaquin County. Check out the "Steamiest Places" section for attractions likely to be of greatest interest to steampunks.

The new SMUD Museum of Science and Curiosity recruited members of the Sacramento Steampunk Society to act as hosts for its inaugural fundraising event, and the Society helped transform the space into a steampunk experience.

It’s not quite autumn yet, but the fall event season is in full swing this weekend with steampunk gatherings coast-to-coast in the U.S. along with happenings in Canada, England, Wales, Portugal, and Finland.

The event featured Old West historical exhibits and re-enactments, along with live music and steampunk vendors. Placerville was known as “Hangtown” during the Gold Rush due to local residents’ notorious use of frontier justice.

U.S. steampunk fans in points East and West will have a chance to get out this weekend with events including Top Brass near Sacramento, Down the Rabbit Hole in Maryland, Escape in Time to Steampunk and Wine in Colorado, and Monsterama in Atlanta. 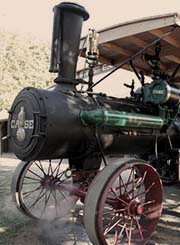 Steampunk Heads West With Events in Washington and Northern California

The North American steampunk calendar is shifting west this weekend with one gathering in North Central Washington state and two more in Northern California. All three will be happening largely outdoors.