The listings below include locations in the state of New Jersey. Check out the "Steamiest Places" section for attractions likely to be of greatest interest to steampunks.

The in-person course at duCret School of The Arts will be taught by Christine Myshka, a professional artist who has been following steampunk for the past 15 years. Students will explore the steampunk aesthetic and complete a series of assignments.

The steampunk duo is slated for multiple performances Saturday and Sunday at the New Jersey Festival of Ballooning, which drew 170,000 attendees in 2019. They’re also planning steampunk meetups and promenades at the festival.

The online festival will include appearances by Frenchy and the Punk, The Eternal Frontier, A Halo Called Fred, and more. It replaces an in-person festival held annually in historic Belvidere, New Jersey. 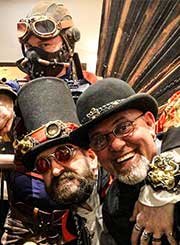 The Morris Museum in Morristown, New Jersey plans a March 15 opening for “Simply Steampunk,” a juried exhibition featuring 18 kinetic sculptures by 12 artists. Running through August 11, it’s the second installment in the “Cache of Kinetic Art” series.

The organizers of C.O.G.S. Expo announced the location, theme and pricing for next year’s event. Scheduled for May 17-19, 2019, it will be held at the Sheraton Parsippany Hotel in New Jersey, notable for its medieval castle exterior. 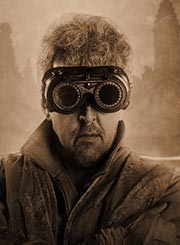 A New Steampunk Event in Jersey

VampireFreaks, an organization best known for hosting a massive social network for the gothic-industrial community, is planning to launch a new steampunk convention next year in Piscataway, New Jersey.