The roots of steampunk lie in 19th century technology, and during that era the Connecticut River Valley played a role similar to that of today's Silicon Valley. The corridor stretching from Springfield, Mass. to Hartford and New Haven was home to factories that pioneered the so-called "American system of manufacturing," notable for its innovative use of interchangeable parts.

Eli Whitney, inventor of the cotton gin, spent much of his life in New Haven, though he was in Georgia when he developed the contraption. In Hartford, Samuel Colt established Colt's Patent Firearms Manufacturing Company, and the city was also a center for making typewriters, sewing machines and bicycles.

Today, that heritage is preserved in places like the Eli Whitney Museum, New Britain Industrial Museum, and Museum of Connecticut History. You'll find these and other locations of interest in the listings below. Check out the "Steamiest Places" section for attractions likely to be of greatest interest to steampunks.

Oddball Newt to Host Another “12 Months of Steampunk” in Connecticut

Oddball Newt, the event organizer in Connecticut, has announced plans for another “12 Months of Steampunk” in 2022, beginning with January’s Victorian Skate Fantasy followed by the Stupid Cupid Steampunk Ball in February.

This weekend’s calendar includes the first-ever Silk City Steampunk Festival in Manchester, Connecticut, and the Steampunk & Industrial Show in Mount Dora, Florida. Author Maurice Broaddus will be a special guest at Metaverse in Atlanta.

It’s another busy weekend on the U.S. steampunk calendar, especially in Connecticut, where two events are taking place. Meanwhile, WhimsyCon returns to Denver and Milwaukee-area steampunks will raise funds to battle bleeding disorders.

Event organizer David Carlson has big plans for 2019, as he rolls out “12 Months of Steampunk,” a series of gatherings in Connecticut that will include a tea house crawl, photo shoots, literary festival, street fair, and holiday-themed parties. 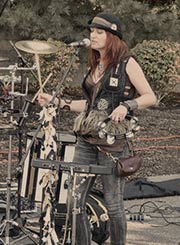 The historic town near Hartford, Connecticut will host the free outdoor steampunk festival

Frenchy and the Punk will be the headliners as Steam Rollin' returns to downtown Manchester, Connecticut, on September 6. The festival will also feature a mustache and beard contest, hat pageant, hooping performance, and more.

It's not as well-known as the cities in England and New Hampshire, but this historic town near Hartford is becoming a center for steampunk activities. The mayor even proclaimed an official "Steampunk Day. . ."