The listings below include locations in the Cincinnati and Dayton areas. Check out the "Steamiest Places" section for attractions likely to be of greatest interest to steampunks.

Organizers of two upcoming steampunk conventions—Clockwork Alchemy in California and the International Steampunk Symposium in Ohio—say they are going forward with plans for those events despite the outbreak of COVID-19. 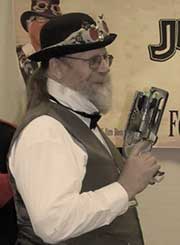 “Steamtastic Beasts” will be the theme as the International Steampunk Symposium returns March 29-31 to Cincinnati. The theme encompasses not only fantastical creatures, but also the 1920s.

Heroes and Villains in Cincinnati

A report and photo gallery from the 2018 International Steampunk Symposium

The International Steampunk Symposium has been running steadily since 2012, and it's become one of the major steampunk events in the Midwest. What makes a con are the people, and this one is a caring, inclusive, and welcoming event.