The Windy City boasts an active steampunk community and lots of historical and cultural attractions. In addition to well known places like the Field Museum and Adler Planetarium, you'll find hidden gems such as the International Museum of Surgical Science and the Sanfilippo Foundation's "Place de la Musique," one of the world's largest collections of mechanizal musical instruments.

The listings below include locations throughout Chicagoland, including the city's suburbs in northwest Indiana. Check out the "Steamiest Places" section for attractions likely to be of greatest interest to steampunks.

The steampunk fest was back in Central Illinois with costumes, Nerf dueling, and lots more

Cogs & Corsets returned June 3 and 4 to downtown Bloomington, Illinois, and once again our correspondent was there was camera in hand to capture the cosplay and other festivities.

The International Steampunk Symposium takes place March 25-27 in Cincinnati. It comes as founder Jason Dean is handing the reins of the convention to two local steampunk enthusiasts, Jennifer Noran and Michael Gruen.

Steampunk Is Back in Central Illinois

Cogs and Corsets, the “Steampunk Happening,” is alive and well after a one-year pandemic hiatus

Photo Gallery: Steampunk fans in the Midwest emerged from their hideouts June 4 as Cogs and Corsets returned to downtown Bloomington, Illinois. Even better for us, contributor Curt Knapp was on hand to take photos and offer his impressions.

The producer of the International Steampunk Symposium will debut a new event, the Chicago Steampunk Exposition, Sept. 27-29 at the Westin O’Hare Hotel. Attendees can expect a packed schedule of panels, games, musical performances, and more.

Scenes from the 2019 edition of Cogs & Corsets, a “Steampunk Happening” in Central Illinois

Cogs & Corsets returned June 7-9 to Central Illinois, featuring the musical Tesla coils of ArcAttack along with cosplay, dancing, a maker competition and more. Our guest photographer Curt Knapp was there to capture the steampunk splendor.

Steampunks from across the Midwest will be making a beeline for central Illinois as Cogs & Corsets returns June 7-9 to downtown Bloomington. This is the third year for the mostly free steampunk festival. 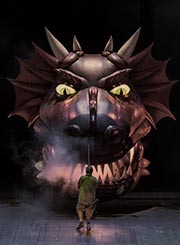 Wagner’s ‘Siegfried’ Gets a Steampunk Look in Chicago

This time, the Lyric Opera of Chicago is presenting a steampunk-themed performance of a Richard Wagner opera.