Steampunks from across the Midwest will be making a beeline for central Illinois as Cogs & Corsets returns June 7-9 to downtown Bloomington. This is the third year for the mostly free steampunk festival, which promises a weekend of live entertainment, workshops, vendors, contests, kids’ activities and more. It takes place at multiple locations, including the McLean County Museum of History and Bloomington Center for the Performing Arts (BCPA).

“We see ourselves as a gateway to learning more about the arts and society of steampunk,” says co-chair Cathy Sutliff.

Leading the entertainment lineup will be ArcAttack, a performance group from Austin, Texas that plays music on large Tesla coils. They’ll present a free outdoor demonstration on Friday night (weather permitting) followed by two ticketed performances on Saturday at BCPA. Tickets cost $25. We’ve seen them perform at Maker Faire Bay Area and give them an enthusiastic thumbs-up.

Actor Joshua Kane will take the stage for ”Gothic at Midnight,” his one-man show in which he performs classic stories from Edgar Allan Poe, Charles Dickens, and Ambrose Bierce. Despite the title, you won’t have to wait until midnight to see it: Free performances are slated for Saturday, 4:30 p.m. and 10 p.m., at BCPA.

Also on tap for the weekend:

• Steampunk promenades on Friday (6 p.m.) and Saturday (9:30 a.m.) in which visitors get to show off their costumes.

• A maker competition featuring steampunk-inspired inventions, accessories, and gadgets. Entries will be on display at Inside Out Accessible Art, a downtown gallery.

• Tea Dueling and Nerf Dueling on Friday evening. The Chicagoland Steampunk Society will preside over the latter.

• A steampunk vendor market with artisans, costumers, and more.

• Photo ops at the McLean County Museum of History, which will have an old-world photo booth in addition to its architectural backdrops.

• Free workshops on topics that include “Anachronistic Makeup & Color Selection,” “The History and Brewing of Tea,” “The Practice of Assemblage,” “Spices of the Victorian Age & Beyond,” “Spiritualism in McLean County,” and “Hoaxes, Charlatans, and Pseudoscience of the 19th Century.”

In addition, Aloysius Fox will discuss “The History and Future of Steampunk,” and attendees will have opportunities to learn about belly dancing and the art of tying men’s neckware.

Though it’s not officially part of the festival, Bloomington will also host a free outdoor blues concert featuring 3rd Street Down, The Something Brothers, Rebirth Brass Band, and Adia Victoria. It’s set for 4:30 p.m. to 10 p.m. on Saturday in the downtown square.

See the website for the full schedule and workshop details. 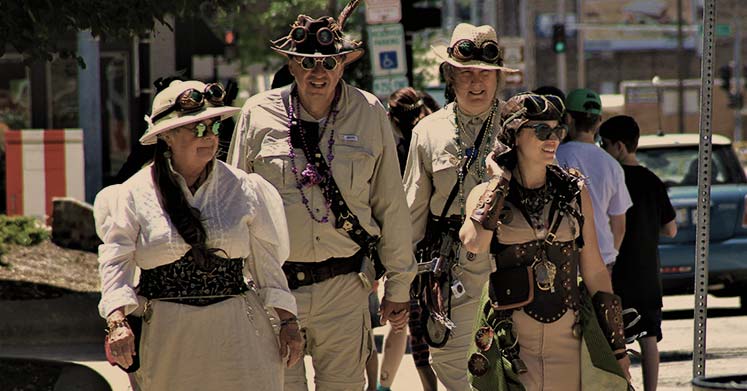 Aside from Saturday’s ArcAttack performances, Cogs & Corsets will have several other ticketed activities:

• Steampunk Contra Dancing with Ceilidh Bandicoots, a band from Chicago. It’s set for 7 p.m. to 11 p.m. on Friday night, with a half-hour break at 8:45 p.m. so dancers can see the ArcAttack demonstration. Tickets cost $15.

• An “Outrageous Etiquette” luncheon on Saturday at 11:30 a.m. It’s hosted by the Tea Ladies of Central Illinois, who promise to share the rules of Victorian etiquette. Tickets cost $25.

• A “Dine with the Dead” picnic on Sunday at 10:30 a.m. at the Evergreen Memorial Cemetery. The $20 ticket includes a guided tour and a trolley ride from Museum Square.

• A brunch at the historic Vrooman Mansion on Sunday at 11 a.m. Tickets cost $28.

The festival’s $125 VIP passes include the ticketed events plus a backstage tour with ArcAttack and other perks. On Sunday, pass holders can choose between the “Dine with the Dead” picnic and Vrooman Mansion brunch.

The Bistro, an alternative bar and performance venue, will host a Steampunk Drag Show on Saturday night at 9 p.m. and 11 p.m. Tickets to the 21+ only event can be purchased at the door. They are not included in the VIP package. The venue is located at 316 N. Main St.

Cogs & Corsets is run by a volunteer committee, and the organizers are seeking additional volunteers to assist over the weekend. You can get a free tea room pass by volunteering for two hours or more. Four hours of work will earn you a free ticket to one of the ArcAttack performances.