“Steamtastic Beasts” will be the theme as the International Steampunk Symposium returns March 29-31 to Cincinnati. The theme encompasses not only fantastical creatures, but also the 1920s, and both will be reflected in the programming, says event organizer Aloysius Fox.

“This year, we have a time-traveling hotel,” he says. “We skip forward into the early 20th century. But next year we return to the 1800s.”

This year’s Symposium will have more thematic programming than before, he says. This includes panels on Art Deco, 1920s costuming and cryptozoology, as well as a mystery game that will run for most of the weekend. “I can’t call it a murder mystery, because it doesn’t involve murder,” he says. “It’s kind of like an escape room meets murder mystery, but it’s the entire hotel.” 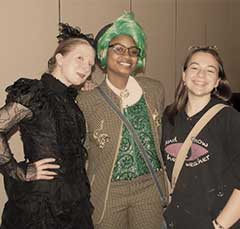 To participate in the game, attendees will need a smartphone with a QR code reader app. During the opening ceremonies, they’ll be introduced to a storyline. At various locations in the hotel, they’ll be able to scan QR codes, which will lead them to other locations that provide clues. Some leads will require passwords, which players will obtain by interacting with cast members.

As in the board game “Clue,” players will ultimately try to answer three questions related to the mystery. The Arbiter of the mystery will put correct responses into a hat, and draw one as the winner during the closing ceremonies. The winner will then reveal the answers to the audience and get a free pass to next year’s Symposium.

The Symposium will also have many panels not tied to the theme. They include an extensive literary track organized by author Leanna Renee Hieber, as well as sessions for cosplayers, makers, history buffs, and more. Other featured presenters include maker James Neathery and authors Robyn Bennis and Emilie P. Bush.

The Symposium’s “signature event” is the Steampunk Olympiad, a series of competitions that include radio-controlled Dirigible Races, Bocce Ball, Air Deck Croquet, “High Noon” Nerf Duels, Tea Dueling, and Teapot Racing. New this year is the “Wingardium Leviosa Challenge,” in which players use wands to move balloons around an obstacle course.

Players register as individuals, but they can earn points for their Airships or other steampunk groups.

To participate, attendees are asked to donate $5 or more to the National Alliance on Mental Illness (NAMI), which has long been the Symposium’s designated charity. NAMI will have a table near the arena.

This year’s musical headliners are Frenchy and the Punk, who will perform on Saturday and Sunday. Saturday night’s performance will be a full show, followed by a set on Sunday afternoon featuring acoustic songs and Scott Helland’s “Guitarmy of One.” The duo will also lead two panels on steampunk music, one on Saturday and one on Sunday.

Following Frenchy and the Punk on Saturday night will be a new Midnight Carnival for attendees (18 and older) with premium badges. Drag/burlesque performer Stixen Stones will emcee a show that includes Hëxa Burlesque and DJ Verminoid. Sales of premium tickets ended on Feb. 28.

Weekend passes cost $65 for adults (21 and older), $45 for young adults (13-20) and $25 for children (6-12). One-day tickets are also available. They’ll be available at the show, but online pre-registration allows use of discount codes and enters you into a raffle. See the website for details.

Fox is also preparing to launch a new event, the Chicago Steampunk Exposition, which is set for Sept. 27-29 at the Westin O’Hare Hotel in Rosemont, Illinois. Musical guests include chap hop artists Mr. B the Gentleman Rhymer and Sir Reginald Pike Devant Esquire, plus Unwoman and DJ Vorteque.

The hotel will provide a much larger venue than the one in Cincinnati, Fox says. This will allow the convention to have more of a festival or World’s Fair atmosphere. Instead of following yearly themes, he’s planning an event devoted more to specific tracks, including steampunk-related genres such as dieselpunk, gothic and time travel.

Photos by Anton Cancre. They’re from the 2018 International Steampunk Symposium.