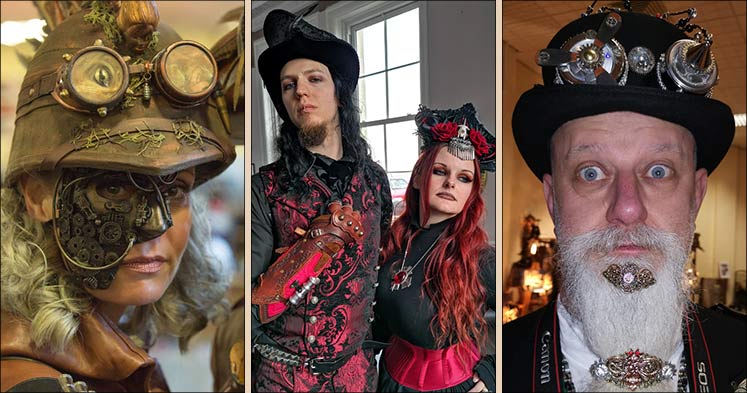 The event featured two halls of vendors plus entertainment, presentations, and workshops. Admission to daytime activities was free. A free-admission fashion show on Friday night served as a prelude. On Saturday night, Alice’s Night Circus headlined a Steampunk Cabaret Evening that also featured performances by Tenpole Tudor and Biscuithead & The Biscuit Badgers.

It all happened despite bad weather as Storm Ciara hit the UK on Sunday with heavy rain and wind gusts up to 97 mph (156 km/h). However, skies were clear enough on Saturday to allow visitors to pose outside.

We have photos from the weekend courtesy of Julian Startup and Michael Young. You can see more of their work in this Facebook album from Julian and this Flickr album from Michael.

The second Whitby Steampunk Weekend will be held July 24-26 in the same location. The organizers are also planning two events in May: Steampunks Beside The Seaside in Scarborough and a Steampunk Weekend in Bridlington. The latter is presented in conjunction with Bridlington Race The Waves, featuring seaside vintage vehicle races.