Steampunk on Parade in Pensacola: A steampunk airship by Krewe of Anarchy is a big hit in the Florida city’s Mardi Gras parade | The Steampunk Explorer
Skip to main content

Steampunk on Parade in Pensacola 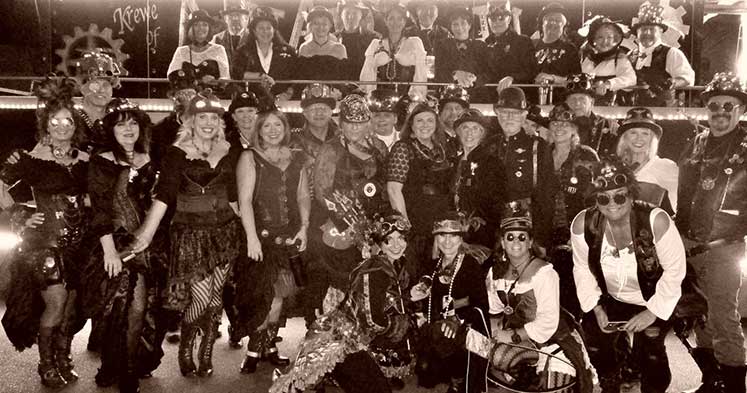 Pensacola, Florida held its first Mardi Gras parade in the late 1800’s and it’s grown to be a big regional attraction. On Saturday, March 2, the parade drew more than 100,000 spectators and featured 91 floats plus additional parade units. Smaller parades were held on Friday and Sunday, along with 40 Mardi Gras balls.

Our Krewe of Anarchy (KOA) is one of about 70 independent krewes in Pensacola. Each has a theme for its floats and costumes. The region has a lot of pirate-themed krewes, but for KOA, we decided on steampunk, and it’s been a hit. The spectators love our industrial/Victorian era costumes and AIRSHIP ONE float.

Like most of the krewes, KOA is a non-profit membership organization. We have 45 members, including school administrators, teachers, engineers, artists, real estate and insurance brokers, independent business owners, a CPA, and a medical doctor. We also have a couple of creative seamstresses. We thank the gods for that, because we design and make our own clothing and jewelry, which we call “bling.”

Some other krewes have hundreds of members (one has over 300), but we limit ours to 45.

AIRSHIP ONE was originally a pirate-themed float that we purchased from a local business and transformed into a steampunk vessel. We did our own carpentry, metalworking, foam fabricating, electrical work and painting. Except for the lighting and sound system, most of the float is made from re-purposed materials acquired from garages, antique stores and salvage yards.

Our costumes include specialty medallions and pins. All but four pins were designed and hand-made by our krewe members.

Like most other krewes, we also give back to our community through charitable activities. Krewe members provide staff support for the American Cancer Society at regional events. Members purchase, wrap and anonymously donate gifts to the Angel Tree Project, which serves underprivileged children in the area. Last Christmas, we donated thousands of dollars to purchase gifts, including more than 20 new bicycles. We also support the Backpack Project at Pensacola Kids House, which serves children who have been removed from their family homes by the Department of Children and Families. For this project, we provided 125 backpacks, filled with clothing, shoes, school supplies, books, toiletries, and toys.

Check out the photo gallery below for scenes from Krewe of Anarchy and the Mardi Gras parades.

The Steampunk Explorer is on Patreon. A monthly pledge of $1 or more supports our work and provides access to premium content. Get the details here.