Steampunk Digest - September 18, 2020: Our weekly roundup of news and other happenings in the steampunk world | The Steampunk Explorer
Skip to main content

Our Time Machine, a critically acclaimed documentary about a steampunk-inspired theatrical production in Shanghai, is now available for streaming in North America. It tells the story of Maleonn, an influential conceptual artist who learns that his father has been diagnosed with Alzheimer’s disease. In response, Maleonn stages Papa’s Time Machine, a time-travel adventure featuring human-sized mechanical puppets.

Directors Yang Sun and S. Leo Chiang describe it as “an intimate look at a middle-class Chinese family facing issues that audiences around the world can immediately relate to.”

The movie premiered at the 2019 Tribeca Film Festival in New York City, where it was recognized for Best Cinematography in a Documentary Feature. It currently has a 100% Fresh rating on Rotten Tomatoes, based on 21 reviews.

You can view the documentary online through links on the U.S. distributor’s website, which includes a trailer. The film is also available on streaming devices. Half of the $12 ticket price will go to the movie theater of your choice. If you choose a designated theater in Northern California, 25 percent of the proceeds will go to the regional chapter of the Alzheimer’s Association. The film can be streamed through Sept. 25.

Chap hop artist Professor Elemental has been keeping busy with some of his friends. In “Devil in the Desert,” he joined the Gaslight Troubadours for a video adventure in the desert sands. He had a prominent guest role in “Swinging Safari,” a new single and music video from Electro Swing DJ Emma Clair and Madam Misfit. And freed from lockdown, he’s embarked on a mini-tour that takes him (not very far) to Brighton, Southampton, and Hastings.

The Brighton show takes place Sept. 22 at The Warren, an outdoor venue. The Oct. 2 show at The Art House in Southampton is sold out, but it will stream worldwide on Zoom. And on Oct. 4, he’ll take the stage with The Sweetchunks at the Hastings Pier. You can keep up with all of the Professor’s antics on his website and Facebook page. 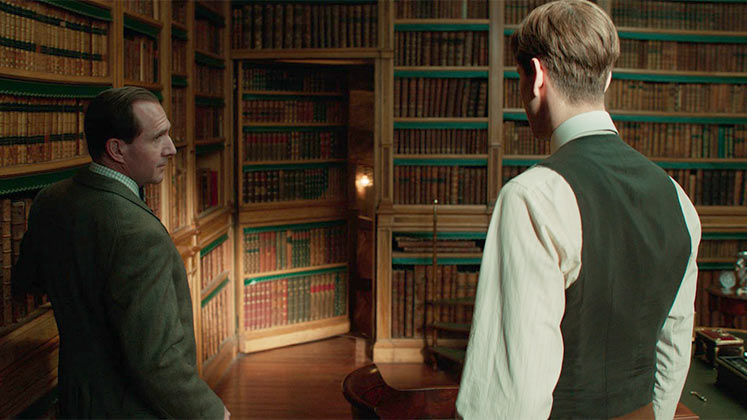 If you were hoping to watch The King’s Man this weekend, we’re sad to report that you’ll have to wait. 20th Century Fox has delayed the premiere of the Kingsman prequel yet again, this time to Feb. 26, 2021. The spy movie, set in the 1910s, stars Ralph Fiennes as the Duke of Oxford, who joins forces with a young protégé and other spies to battle a group of tyrants and criminal masterminds. Originally scheduled for a November 2019 release, it was delayed to February 2020 and then to Sept. 18 before this latest pushback.

MagellanTV, a streaming TV service that focuses on documentaries, is accepting applications for the “MagellanTV Leadership Dream Job.” In a promotion tied to the upcoming election, the service will pay one U.S. voter $2020 to binge-watch 24 documentaries about famous leaders in history. After watching each documentary, this individual will post their impressions on social media or host a livestream. You’ll have 48 hours to complete the project.

The application requests your social media profiles and asks for your views about leadership. Applications close on Oct. 5. In addition to cash, the winner will get a free 1-year membership for themself and two 3-month memberships for friends or family. It’s open to U.S. residents age 18 or older. See the website for more info.

Steampunk fans in Gananoque, Ontario will host the Gan Virtually Amazing Steampunk Festival, an online event that replaces a gathering planned this year in town. Presented live from The Royal Theatre in Gananoque, it will include a virtual costume parade accompanied by musical guests Doug Gifford and the Goat-Steppers Parade Band. Professor Taelstrum will present steampunk tales from a secret location and Christina Kaya will perform magic. The organizers will close the event by presenting the winners in their Fabulous Face Mask Challenge.

It’s scheduled for Saturday, Sept. 19, beginning 7 p.m. Eastern time. It will stream on Facebook, or you can request a Zoom invite from a form on the home page. The local newspaper has a write-up about the event.

Also this weekend, Futurecon is an online science fiction convention with an international focus. Panelists from more than 20 countries will discuss topics such as “Techno-traditions in Japan and Korea,” “The Melting Pot of Creativity in Brazil,” “The Rising Phenomenon of Chinese SF,” and “Visions from Nigeria and Uganda.” Speakers include Nisi Shawl, Ann VanderMeer, and Kim Stanley Robinson. Panels will stream on YouTube, with Discord serving as a discussion channel. It runs Sept. 17-20. Learn more on the website.

Our Online/Virtual Events calendar has listings of other upcoming happenings in cyberspace, as well as ongoing and archived events. Find it here.

Congratulations to author Maurice Broaddus, whose novel Pimp My Airship won the 2020 Indiana Authors Award in the genre category. The story involves a poet who joins forces with a young heiress and a “professional protestor” as they fight for their freedom in an alternate-world Indianapolis.

Each winner gets $5000, a hand-crafted limestone award, and a chance to donate $500 to the Indiana library of their choice. Learn more on the author’s website.

The title is an allusion to The Hero with a Thousand Faces, Joseph Campbell’s seminal work about mythology and archetypal heroes.

It’s set for an Oct. 1 release as an e-book. She’s also planning print and audiobook editions. Learn more, including ordering info, on her website.

If you missed Leanna Renee Hieber’s Strangely Beautiful saga, now you can get all four books in a single discounted e-bundle. The series began with her romantic Gaslamp fantasy Strangely Beautiful, about a young woman in Victorian London who can communicate with ghosts. It was originally published as two books and then combined into a single volume. Hieber followed that with Perilous Prophecy, a prequel set in Cairo, and then a sequel, Miss Violet and the Great War. See her blog for links to booksellers.

Author Michelle E. Lowe has released The Age of the Machine, the first in a new steampunk series. The story involves an army of hybrid soldiers known as the Living Automatons who steal a fleet of American airships and threaten an attack on England. The protagonist is the son of a famous ex-thief who joins forces with his half-brother to thwart the attacks.

She’s planning a giveaway on Goodreads where you can win one of 100 copies. It runs through Oct. 12.

The book is available in digital and paperback editions. She’s set up a Facebook page for the series. Learn more on her website.

Author Jack Salva is out with Dybbuk’s Asylum, the first book in his new Knowledge Reclamators steampunk series. The Knowledge Reclamators are a team of adventurers who seek hidden stores of information in a “post-Luddite Tyranny world.” Salva is already at work on the second book, The Stranded Sibling Sojourn, and has plans for two more.

It’s available as an e-book and paperback from Amazon. See the author’s website for more info.

Last week, we told you about the Kickstarter campaign for a forthcoming video game based on the popular Girl Genius comic series by Phil and Kaja Foglio. Since then, developer Rain Games has shared some additional news.

First, they’ve been approved for development on Nintendo Switch. Rain Games originally announced its intention to offer the game on PCs and consoles, but wasn’t yet ready to specify which consoles. If you pledge $60 or more, you now have the option to order the Nintendo version when the game is available. The release is targeted for December 2022.

Also, if you want to learn more about the project, Rain Games will discuss it on The Dialog Box, a live podcast hosted on Twitch by game developer Gwen Frey. Frey’s credits include work on BioShock Infinite, a popular video game with steampunk elements. The podcast is set for Saturday, Sept. 19, at 6 p.m. Central European time (that’s noon U.S. Eastern time and 9 a.m. Pacific time). Get the details on the Kickstarter page.

As of Thursday, the campaign was about halfway toward its ambitious US $200,000 fundraising goal. It runs through Oct. 3. See the Kickstarter page for more info.

Trigger The Monster, a video game developer in Granada, Spain, is on Kickstarter with S.O.L Search of Light, described as a “side scrolling adventure” in a steampunk and dark fantasy style. You play as the inhabitant of an underground world seeking to reach the surface. You’re assisted by small domestic robots as you gather gems and other objects to protect your village against enemies who attack at night. A free demo is available for download.

Aristo Play Cards is seeking Kickstarter funds for Volume 2 of The Art of Steampunk, a set of standard playing cards depicting steampunk characters and gadgetry. Each deck features 54 cards with “iconic imagery and lots of metal detailing,” the publisher writes. The Kickstarter page links to a 3D model of the cards that can be viewed through your browser or with a VR headset.

The campaign launched Aug. 31 and met its $1447 goal within an hour. It runs through Oct. 17. See the Kickstarter page for more info.

Michael Chokash of Edmonton, Alberta, is on Kickstarter with The WEE Little Adventures of Shabu and Chow, a series of four illustrated “steampunk-ish” adventures for children. Shabu is a rabbit inventor and Chow is her best friend, a “mechanically-minded” squirrel with a fondness for singing opera in the shower. It’s “about curiosity and exploration mixed with a healthy bit of inventiveness and imagination,” the author writes.

Ernoldas Pocius, a jewelry artist in Klaipeda, Lithuania, is seeking Kickstarter funds for NESTRE, a set of steampunk pendants made from old watch movements. They’re assembled in a stainless steel frame, covered with resin, and hang from a leather cord. You can choose from different watch, frame, and cord colors for a total of 240 combinations.

Prep Your Exo-Rig and Dive into an All New Steampunk Adventure. Vaporum: Lockdown (GamingLyfe.com)

Why Oamaru is the best wee town in New Zealand (Stuff)