Steampunk Digest - November 27, 2020: Our weekly roundup of news and other happenings in the steampunk world | The Steampunk Explorer
Skip to main content

Good news for Doctor Who fans: Captain Jack Harkness, the popular character portrayed by John Barrowman, will have a major role in this year’s holiday special, entitled “Revolution of the Daleks.” The Captain made a surprise appearance in the Season 12 episode “Fugitive of the Judoon,” but now it seems he’ll be back in a bigger way.

Lucky for us, the special was filmed before COVID-19 shut down productions earlier this year. There’s no word yet on the air date.

Barrowman has been a fan favorite since he first appeared in the 2005 episode “The Empty Child.” Later, he starred in the spinoff series Torchwood. Prior to Season 12, his last Doctor Who appearance was in 2010.

Meanwhile, production has commenced on Season 13, but it will be shorter than past seasons. “Given the complexity of making Doctor Who, and with new and rigorous Covid working protocols, it’s going to take us a little longer to film each episode, meaning we expect to end up with eight episodes, rather than the usual eleven,” said showrunner Chris Chibnall in a BBC press release. “But rest assured, the ambition, humour, fun and scares you expect from Doctor Who will all still be firmly in place.”

The show occasionally steps into steampunk territory, as seen in the season 12 episode “Nikola Tesla’s Night of Terror.” But whether the TARDIS is headed to the past, present, or future, lots of steampunks count themselves as fans.

If you can’t wait for your Time Lord fix, you can head over to Chicago TARDIS, a Doctor Who fan convention that’s happening virtually on Friday and Saturday. Special guests include Paul McGann, who portrayed the eighth Doctor in a 1996 TV film, plus Sophie Aldred and Frazer Hines, who played Doctor Who companions. Hines appeared in 117 episodes, the most of any companion.

The program will also feature virtual panels on Doctor Who music, fan art, gaming, cosplay, and more. A virtual masquerade is set for Saturday evening.

The fun begins Friday, Nov. 27 at 10 a.m. Central Time. It all streams for free on the convention’s Facebook page and YouTube channel. See the Chicago TARDIS website for more info.

The Society for the Ethical Treatment of Kraken is hosting the Secret Steampunk Gift Exchange, a program that will allow participants to exchange inexpensive gifts via mail. Once you sign up, you’ll be matched with another participant with whom you can exchange the gifts. It’s open to anyone 18 years of age or older regardless of location. There is no cost to participate. Suggested gift value is $10.

The deadline for signups is Nov. 28, but we’re told the organizers will extend this to Nov. 30 for readers of The Steampunk Explorer. See the website for more info and the complete rules.

With its whimsical art cars and Lewis Carroll characters, the annual Mad Hatter Holiday Parade in Vallejo, California has a prominent place on the Bay Area steampunk calendar. Given COVID restrictions, a regular parade this year was not in the cards, but producer Frank Malifrando held out a slim hope for a socially distanced drive-in event. Alas, that’s not happening due to the recent viral upsurge, the local newspaper reports.

The idea for a drive-in version came from Kathy O’Hare of Obtainium Works, the Vallejo-based art car studio whose vehicles are a big part of the parade. It would have been “Alice in Wonderland kind of stuff … but you’d be driving through,” Malifrando told the Times-Herald.

Now he fears that next year’s event will be a financial challenge due to the pandemic’s economic impact. “A lot of businesses are hurting that would be sponsors,” he said.

In lieu of a live happening, you can check out our photo galleries from the 2018 and 2019 Mad Hatter parades.

If you’re a fan of documentaries, the streaming service CuriosityStream is offering a Black Friday deal: $11.99 for a one-year HD subscription that normally costs $19.99. Or you can view the documentaries in 4K resolution for $41.99 per year (normally $69.99). The service offers more than 3000 documentaries in seven categories, including science and history. About 900 are originals exclusive to the service.

Three BBC programs caught our eye, though they can also be viewed for free on YouTube. In Mechanical Marvels: Clockwork Dreams, science historian Simon Schaffer looks at the “bizarre and untold history of automata.” A Stitch in Time is a six-episode series in which fashion historian Amber Butchart “explores the lives of historical figures through the clothes they wore.” And Calculating Ada: The Countess of Computing is a one-off documentary about Ada Lovelace, the 19th century mathematician credited as being the first computer programmer.

The deal is good through Sunday, Nov. 29. You’ll need to use the promo code BF2020. You can get the details on the home page. 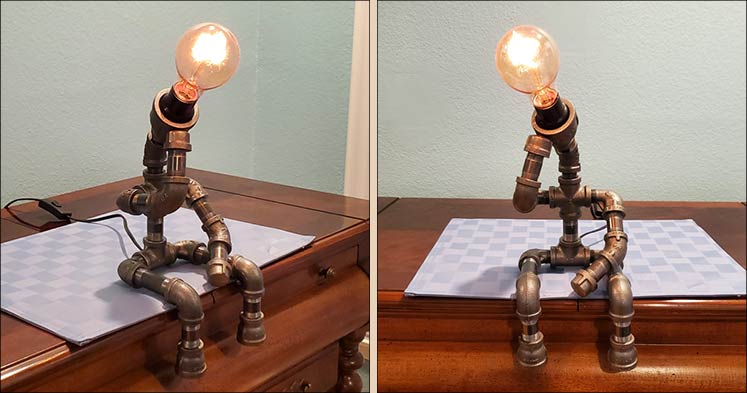 Los Angeles artist David Bodell is back on Kickstarter with a series of steampunk-themed lamps. They include The Thinker (above) as well as lamps made from railroad relays and accordion cameras. He can also custom-build lamps with themed objects suggested by customers.

He previously raised $14,459 in a successful campaign for The Thinker, a lamp made from iron gas pipe and modeled after the famous Rodin statue.

Pledges begin at $129 for The Thinker. A pledge of $499 or more will get you a custom-themed lamp.

This new campaign launched Nov. 23 and seeks US $1500 by Dec. 10. See the Kickstarter page and Bodell’s website for more info.

George Vega, an illustrator and graphic designer in Rutherford, New Jersey, is seeking Kickstarter funds for The World Of M #2, the second issue of his steampunk fantasy comic. The series relates the adventures of Jack Mast, a man who “must unburden himself from his past and rekindle a friendship with a sentient steambot called Walter Tank.” The second issue consists of a full 22-page story appropriate for all ages.

He previously raised $3887 in a successful campaign for the first issue. You can read the first 12 pages of that issue for free on GlobalComix.

Vega has also worked on trading card sets for Marvel/Upper Deck and DC/Cryptozoic.

App Army Assemble: Lamplight City - Is this steampunk detective adventure one you should investigate? (Pocket Gamer)

Who set up this mysterious metal monolith in Utah desert? (It’s not aliens.) (LiveScience)

Mysterious Monolith Has Been There For Years, According to Google Earth (Futurism)

2 of Darwin’s famous notebooks, including iconic ‘Tree of Life’ sketch, are missing (LiveScience)