Steampunk Digest - August 28, 2020: Our weekly roundup of news and other happenings in the steampunk world | The Steampunk Explorer
Skip to main content

The Ministry of Steampunk has big plans for Sanctuary, the online event happening this weekend in place of the Asylum Steampunk Festival. One highlight will be Friday night’s Steampunkavision, featuring performances by Madam Misfit, Captain Kuppa T, Lindsey Tutt & Zingaro Blue, Frenchy and the Punk, Scarlet Butterfly, Violet Hugh, Victor and the Bully, Feline and Strange, and Victor Sierra. It begins at 8 p.m. British Summer Time (UTC+01) and runs through midnight.

The event will have a real-world component at Kelham Hall & Country Park near Newark, UK with a picnic, promenade, and merchants.

Schedules for Friday, Saturday, and Sunday are posted on the Facebook page. Times are all UTC+01. Subtract 5 hours for U.S. Eastern Time and 8 hours for Pacific Time.

Madam Misfit has released “True You,” a new single and music video from her debut album Elixir of Swing. She describes the sound as “Crisp Swing House” with chap hop vocals. The video, produced by Ben Henderson, features a large cast of characters, including steampunk cosplayer Ruffles & Steam and backing musicians who appear to be escapees from Area 51. It’s available for streaming or download from all the usual places.

You can purchase the physical album from her online store or download it from your favorite online music store.

As noted above, Madam Misfit will also be performing Friday night at the Sanctuary online steampunk festival.

Captain of the Lost Waves, a musician who frequently performs at UK steampunk gatherings, is one of 12 artists from England chosen to participate in Global Music Match, an international music promotion event that runs Aug. 31 through Oct. 11. Participating musicians and bands will be teamed with artists from other countries. Each week, they will promote a team member to their audience via social media, and that team member will return the favor with their own followers. The Captain’s group includes performers from Australia, Canada, Finland, Italy, and the USA.

The pilot edition will feature 96 artists from 14 countries, with a focus on acoustic, folk, roots, traditional, and world music genres.

Dragon Soul Press is accepting submissions for Imperial Devices, an R-rated steampunk anthology slated for publication in March 2021. They’re looking for stories ranging from 500 to 15,000 words and will consider related genres such as dieselpunk. Authors will receive 30 percent royalties during the first year of publication. You can submit up to two stories. Submission deadline is Nov. 30, 2020.

The website includes downloadable submission guidelines as well as other upcoming anthologies. The publisher advises prospective authors to join its private Facebook group for updates.

Tor Books has released The Last Uncharted Sky, the third and final book in Curtis Craddock’s Risen Kingdoms fantasy series. Described as “The Three Musketeers meets Jules Verne,” the story involves a perilous airship expedition in search of a fabled treasure. But airship captain Princess Isabelle must also deal with horrifying hallucinations brought on by a previous attack.

It’s available in hardcover and e-book formats from Amazon. See the author’s website for more info. 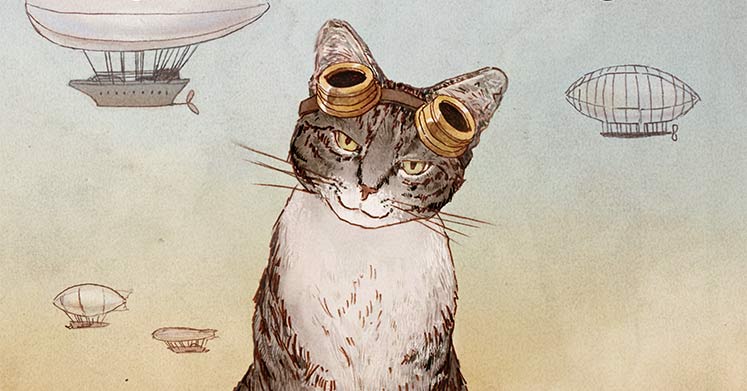 It’s set in 19th century Hammersmyth, a fictional city “at the heart of the Great Steam Revolution.” The story is “full of arrogant aristocrats, secret societies, and criminal chocolatiers,” the author says.

The book is set for release on Aug. 29. It’s available as an e-book from Amazon and Smashwords. See Dickinson’s website for more info.

Author Isaac D. Peterson has released The Brass Starling, the first novel in his Willow Locke series. Set in 1910, the story involves the Lostch family, which has fled a pogrom in Prague to settle in Manhattan’s Lower East Side. Reuven, the father, conceives a revolutionary invention that draws unwanted attention from thuggish corporations. Teenage daughter Talia adopts an alter ego as Willow Locke, uncovers proof of an ancient evil, and joins forces with Nikola Tesla to battle the corporate conspiracy.

Peterson, who also works as a designer and illustrator, says he wrote the book over seven years. His inspirations include William Gibson and Jeff Vandermeer.

The book is available from Amazon in e-book and paperback formats. See the author’s website for more info.

Author Joseph Rollins has published his first novel, Iron Spires Over the White City. The setting is an alternate history British Empire where the American Revolution never happened, and wars are fought with steam-powered tanks, airships, and mechanical animals. The story takes place in the South American rainforest where a member of a British colonial family has been kidnapped by resistance forces.

Rollins, who resides in central Arizona, is a graduate of Cal State Fullerton, which is also the alma mater of pioneering steampunk authors Tim Powers, James P. Blaylock, and K.W. Jeter.

The book is available as an e-book and paperback from Amazon. Learn more on the author’s website.

Eli August, a frequent performer at steampunk events, also plays guitar for Fermata, a Baltimore-area band that released its only album in 2009. Now he’s on Indiegogo to raise funds for a follow-up that’s slated for release in March 2021. The band describes its sound as “aggressive and emotive acoustic chamber rock.” They’ve released one new single, “Silhouettes,” on Bandcamp. You can download their debut album Only Ghosts Remain for free.

The Indiegogo campaign has already surpassed its $2000 fundraising goal, but they’re still short of the estimated $6000 needed to complete the album. See the Indiegogo page for more info.

Brahn Smith of Portland, Maine is on Kickstarter with Sun Moon Stars, a comic book set in an alternate-history Victorian world. “In Laurasia, people believe they have built themselves an ‘utopia’ where gender, sexuality, and race supposedly don’t matter in climbing the social ladder,” the author writes. “This is a sweet lie from the lips of the elite, and the truth comes to light when a sudden change comes over a fourth of the population, morphing them into powerful beings. When everyone from the poorest to the richest can become Changed, the Changed become the new threat to society. Tired of the lies and abuses, a small group of people lead the Changed in a fight for their rights, and their lives.”

Smith promises “magic, romance, steam power, action, and a revolution.” Most of the main characters are LGBTQ+.

Justin Bysma of Edmonton, Alberta is seeking Kickstarter funds for Nevermore Stories, a comic book inspired by works of Edgar Allen Poe. It has two parts: “Nevermore,” an illustrated poem inspired by “The Raven,” and “Absence,” a story by Manda Brownrigg that’s described as a “dark fantasy tribute to ‘A Tell-Tale Heart.’”

Bysma is a professional animator whose credits include the series Gary and His Demons, Fugget About It, and Total Drama Island.

The Ineluctable, Ultra-Telegraphic Virtual Brass Screw has a new date. The online event from Olympic Peninsula Steam, originally scheduled for June 13, will now be held Sept. 12 from 10 a.m. to 6 p.m. Pacific time. The program will feature a musical performance by Nathaniel Johnstone along with magic, educational presentations, a fashion show, a maker exhibition, and a virtual vendor bazaar. Participation is free, but you should register via Eventbrite to get links, a schedule, and other details.

The free event will be followed by Burlesque: Through the Aether, a ticketed “Virtual Vaudevillian Cabaret” produced in conjunction with Lacy Productions of Portland, Oregon. It runs from 7 p.m. to 8:30 p.m. Pacific time. General admission costs $15, or you can pay $25 for a VIP ticket that includes a Meet & Greet via Zoom. Tickets for this event are also available on Eventbrite.

Olympic Peninsula Steam is producing the event as a virtual replacement for the Brass Screw Alliance steampunk festival, held annually in Port Townsend, Washington. See the website and Facebook page for more info.

The organizers of the Gan Steampunk Festival have announced details for their Virtual Gala, which replaces the in-person festival that was scheduled for Sept. 11-13 in Gananoque, Ontario. The online event will take place Sept. 19, beginning 7 p.m. Eastern time, on Facebook and Zoom. Presented live from The Royal Theatre in Gananoque, the program will include a virtual costume parade accompanied by musical guests Doug Gifford and the Goat-Steppers Parade Band. Professor Taelstrum will present steampunk tales from a secret location and Christina Kaya will perform magic.

The organizers will close the event by presenting the winners in their Fabulous Face Mask Challenge. It’s open to any functional face mask, which can be “simple like an embellished cloth mask, or as elaborate as you like: a unique take on a plague doctor mask, a gas mask, etc.” Winners in three categories will be selected by a vote on Instagram and Facebook. Prizes include tickets to next year’s in-person festival.

See the Facebook announcement for the full schedule and other details.

Our Online/Virtual Events calendar has listings of other upcoming happenings in cyberspace, as well as ongoing and archived events. Find it here.

Event producer Aloysius Fox announced last week that he’s postponing the Chicago Steampunk Exposition to April 28-May 1, 2022. It was originally scheduled for April 23-25, 2021. “Even though April 2021 seems so far off, reports and projections indicate that Chicago and Illinois may well still be in Phase 4 of the state’s Covid19 plan,” he wrote. “During this phase, gatherings of more than 100 people are prohibited, and it will not be until Phase 5 that conditions will have return to normal and be safe again for the large fandom conventions that we know and love.”

The Exposition debuted in Sept. 2019. His other major event, the Steampunk Symposium, is still on target for Aug. 20-22, 2021 in Cincinnati.

Meanwhile, the organizers of the Atlanta Steampunk Exposition announced plans for the next edition, which is slated for February 5-7, 2021 at the Doubletree by Hilton Atlanta Perimeter Dunwoody. The past three expositions have been held in the fall.

“We are keeping a weather eye on world developments, as our primary focus is providing a safe and enjoyable experience for all our attendees,” they wrote on the website. “We appreciate your patience as we navigate these unique circumstances.”

Early-bird passes for $45 will be available through Oct. 4. See the website for more info.

What Science Has Learned From Science Fiction? (Science Times)

Two books reassess the work and forward thinking of H.G. Wells, one of the 20th century’s great futurists (Canberra Times)

Hey, Wanna Ride in an Airship to the North Pole? (Popular Mechanics)