Steampunk Digest - August 10, 2018: Our weekly roundup of news and other happenings in the steampunk world | The Steampunk Explorer
Skip to main content

Worldcon, the World Science Fiction Convention, will be held August 16-20 in San Jose, within shouting distance of The Steampunk Explorer’s International Headquarters. The program lists several steampunk-themed panels, including “Carriger & Adina Talk Steampunk (tea and silliness optional)” with authors Gail Carriger and Shelley Adina; “The Victorian & Edwardian Tech Tree” with Steve Frankel; and “Defining Steampunk” with Elektra Hammond, Anastasia Hunter, William C. Tracy, Diana M. Pho, and Jaymee Goh. We plan to be there, and for the benefit of attendees, we’ll be posting stories about steampunk-related attractions in San Jose and elsewhere in Silicon Valley. 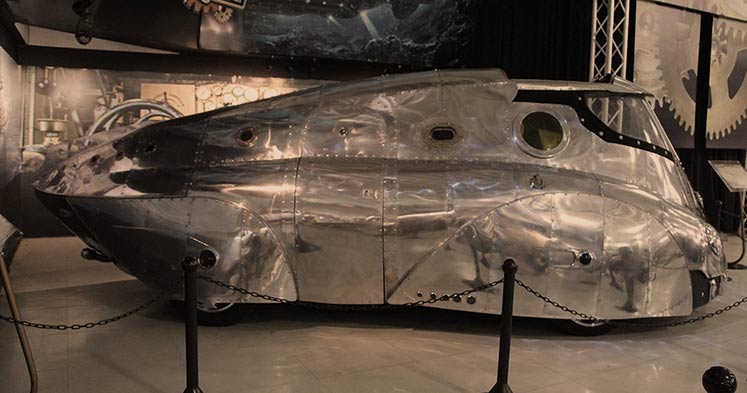 Jay Leno went steampunk in an episode of “Jay Leno’s Garage” that aired August 2 on CNBC. During the six-minute segment, Leno was joined by Kevin Kastler (aka Doc Phineas), along with Chap Hop artist Poplock Holmes, Kathy and Shannon O’Hare of Obtainium Works, and designers Kimric Smythe and Baron Margo. The O’Hares showed their Wine Trike and Pirate Ship, followed by Smythe’s steam-powered Kristie’s Flyer. The segment ended with Leno and Margo cruising the streets of Southern California in the latter’s “Metamorphosis,” a submarine-like vehicle that’s currently on display at the San Diego Automotive Museum. The episode, themed “Rolling Sculpture,” also has Leno in other eye-catching vehicles. In the opening segment, he rides in a Lamborghini with “The Daily Show” host Trevor Noah.

If you’re a cable subscriber, you can view the episode on the CNBC website. It’s also available for sale on iTunes and Amazon.com. You can read about it in the Vallejo Times Herald, the O’Hares’ hometown newspaper.

The photo of Metamorphosis is from the automotive museum’s exhibition, “Steampunk with a Retro Twist,” which runs through October 7.

The Key City Steampunk Festival is set for August 17-19 in Frederick, Maryland, and as we reported in April, some of the best-known makers in the steampunk world will be on hand. Since then, lead organizer Wheeler Stone has launched a website for the event that includes a schedule and vendor list. Among the highlights: maker panels, a vehicular exhibit, a charity dunk tank, and even a steampunk wedding. Guest performers include Karnevil, Nightwatch Paradox, This Way to the Egress, and Honey Bee Burlesque.

Adult tickets range from $15 for a single-day pass to $50 for a full weekend pass. It will be held at the Clarion Inn Frederick Event Center, 5400 Holiday Dr, Frederick, MD 21703.

Thousands of attendees are expected at the Steampunk Tasmania Festival, which takes place August 18 in George Town, Tasmania. “A machine insect, an Olympics with a twist and a fashion parade are all some of the surprises expected,” writes Tarlia Jordan in The Examiner, a local newspaper. The sporting event, dubbed the “Steampire Games of Realm,” will feature “events such as tea cup racing, cob tossing, three-legged races, and a cog and spanner race,” she writes. You can read the story here, or visit the event’s website.

The Holiday Dance Studio and ABQ Steampunk Society in Albuquerque, New Mexico, are hosting “Murder, Discord, and Mayhem,” a steampunk-themed murder mystery live action role-playing game. It’s set for August 11 from 6 p.m. to 10 p.m. MDT. “Your character has secrets but so does everyone else,” the organizers say. “You interview others as your steampunk character would: ACTING!” The event also includes music and dancing. Tickets cost $35 per person. See the Facebook page for more info.

We recently told you about Patent Pending, the cocktail bar in downtown Manhattan that’s inspired by Nikola Tesla. Now The New York Times has weighed in. “By day, the small basement-level space operates as a third-wave coffee shop called Patent Coffee,” writes Matthew Sedacca. “After 5 p.m., a ‘secret’ accordion door opens to unveil a 34-seat cocktail lounge with exposed brick walls and half-mirrored light bulbs.” He warns that the wait time can be up to 90 minutes during “peak after-work hours.” Read the story here.

Speaking of Tesla, the inventor’s Wardenclyffe laboratory in Shoreham, New York, has been designated for inclusion on the National Historic Register, according to a press release. Spearheading the effort was the Tesla Science Center at Wardenclyffe (TSCW), a non-profit that’s seeking to restore the property. “Listing on the National Historic Register not only helps preserve Nikola Tesla’s last remaining laboratory, but it allows us to move forward with renovations and plans to develop Wardenclyffe into a world class science and innovation center,” said executive director Marc Alessi. “NHR listing also opens doors for funding, as many grants require official historic status.” Learn more on the TSCW website.

“Oh how I wanted to love Steampunk Rally with all my heart,” writes “The Meeple Guild” columnist in Yorkton This Week, referring to a strategy game by Roxley Game Laboratory that was released in 2015. “I am a sucker for steampunk, and when you add the cool theme to a box top art piece showing a sort of cartoonish version of Tesla and a strange flying machine, well I was past excited to give this one my heart.” Players draw cards and throw dice to build and race steampunk inventions, but “it ends up feeling like too much work for the amount of fun in the game.” The verdict: Steampunk fans may be interested, but others might want to look elsewhere. You can read the review here, or visit the Roxley website.

A self-serve, steampunk-inspired taproom is set to open the first week of September in Cedar Point, North Carolina, a coastal town about 80 miles northeast of Wilmington. Dubbed 34° North, the taproom will incorporate “technology and aesthetic designs inspired by 19th century industrial machinery,” reports the Carteret County News-Times. The self-serve beverage technology was developed by iPourIt. Read the story here.