Steampunk “Cools” at Maker Faire: Steampunk had a muted presence this year, but the event still served up some wacky wonders | The Steampunk Explorer
Skip to main content

Steampunk has long played a role at Maker Faire Bay Area, the huge annual gathering of inventors, tinkerers and do-it-yourselfers in San Mateo, California. Past events have included a dedicated steampunk area, along with large-scale projects such as the Nautilus Submarine Art Car and Neverwas Haul. Back in 2011, Maker Faire provided my first real-world encounter with steampunk culture, demonstrating that it was more than a literary genre.

Sadly, steampunk had a lower profile this year, amid signs that the organizers are backing away from the category. Still, the Faire was a showcase for notable steampunk works, plus creations that might be regarded as “steampunk-ish.” It was held May 18-20 at the San Mateo County Event Center. 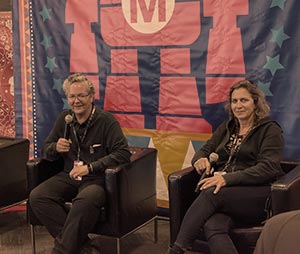 During a press conference on the opening day, I asked Maker Media CEO Dale Dougherty about steampunk’s place at the event. I expected an uplifting quote about the connection between steampunk and maker culture, but that’s not what I got.

“I think steampunk has cooled a little bit here,” he said, before shifting to a discussion of cosplay and costuming. Without mentioning steampunk, program director Sabrina Merlo added that Maker Faire would have more cosplay-related programming, as she saw costuming as an entry point to the maker world for many people. Obviously, steampunk is much more than cosplay, but I wasn’t about to start a debate in the middle of a press event.

The Wacky Wonders of Obtainium Works

In one sign of that “cooling,” Maker Faire’s steampunk area was labeled on the map not as “Steampunk,” as in previous years, but as “Obtainium Works.” The change was largely cosmetic, as the area still had steampunk vendors, and Obtainium Works has been the anchor of that section for as long as I’ve been attending Maker Faire. But the section appeared to be smaller and had fewer vendors than last year. 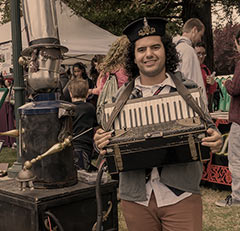 However it was labeled, the area had its share of wacky wonders. Sitting quietly on a table was Deviled Egg, a robot designed by Zak Hassanein to compete in the current season of BattleBots on Discovery Networks. More interesting to me was Deus Ex Machina, the contraption built by Obtainium Works to carry the robot into the arena. Zak posed alongside the carrier with its controller, which happens to be an accordion.

Another attention-getter was Kinder Panzer, a post-apocalyptic tank/art car covered with highway signs. Three of the creators were on hand as Mad Max-style characters wielding fake weapons (at least I think they were fake).

Kinder Panzer was one of several Maker Faire projects first seen at Burning Man, and you can learn more about them in my previous story, “Burners at Maker Faire.”

Not far from Obtainium Works, I encountered Tom Sepe’s Ridiculous Robots, including his mechanical Can-Can dancers plus a “sweeperbot,” sitting on a mobile wooden barrel and wielding a whisk broom. Parked nearby was The Whirlygig, Sepe’s steampunk motorbike.

In the Main Hall

Inside the main exhibit hall, SteamyTech had a booth to promote The Box of Making, a subscription program in which you pay $79.95 every two months to receive a box containing three or four maker projects that include gears. Based in San Jose, SteamyTech is a fixture at Clockwork Alchemy, the Bay Area’s major steampunk convention. Joining company owners Greg and Lora Price in the booth were Dr. Nathaniel Blackheart, who organizes the art gallery at Clockwork Alchemy, and Tom Badillo, who manages the War Room. 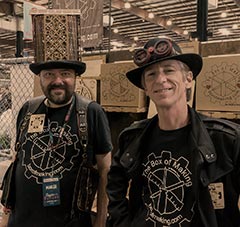 After hobnobbing with the folks at SteamyTech, I found myself face-to-face with Darth Vader and an Imperial Stormtrooper, who surprised attendees by striding through the hall. They were members of the 501st Legion, a group of Star Wars cosplayers who raise money for charity. Apparently, my camera was more powerful than a lightsaber, as they stopped in their tracks and posed as soon as they saw it.

The main hall also hosted numerous makerspaces, including Sacramento’s Hacker Lab, L.A.’s CrashSpace, Ace Monster Toys in Berkeley and the Cupertinker Maker Space in Cupertino. These member-supported organizations provide access to fabrication equipment and other resources, and their booths served as showcases for members’ projects.

My favorite Maker Faire project in 2017 was the steam-powered pencil sharpener from Kinetic Steam Works (KSW), a group of volunteer fabricators in Oakland. There were no Rube Goldberg contraptions this year, but KSW’s area was still the place to be if you wanted to learn more about steam power and how it works in the real world.

The big project this time was Rose, a large, newly restored tractor with an ear-splitting whistle. They also had a smaller “D”-valve steam engine, plus a steam-powered letterpress and a live demonstration of how to cast large metal gears. Each steam engine was accompanied by a diagram explaining how it operates.

Rising from the Ashes

One of Maker Faire’s perennial highlights is the Dark Room, a showcase for illuminated artworks. Among them was a Bioluminoid sculpture by Erick Dunn, an artist in Sonoma County who lost his home, workshop and art collection in last October’s disastrous wildfires. This new towering sculpture was his first since the disaster. He has set up a 501(c)(3) non-profit to raise funds for new projects, with details on his website.

This year, the Dark Room occupied a smaller building, and so Stanton Clark’s Astro Botanicals — a forest of inflatable botanical forms seen at previous Maker Faires — were reduced to a single large mushroom.

These were just some of the highlights this year. Maker Faire is a huge event, drawing more than 125,000 attendees and 1200 curated projects in categories that include robotics, drones, woodworking, metal fabrication, music, vehicles, kinetic art, and virtual reality. The slide show below has a sampling of that work with an emphasis on steampunk and the “steampunk-ish.”

Despite the “cooling” of steampunk at Maker Faire, I would encourage artists in the steampunk world to get involved in the maker community, or at least to learn more about it. Even if you don’t encounter other steampunks, you are likely to find creative people who are willing to share ideas and expertise.

In addition, many cities have member-supported makerspaces. They can be costly to join, but many offer free classes and other resources that don’t require paid membership. You can find listings of makerspaces in the Arts & Crafts sections of our City Guides.