A Steampunk Autumn in New England: Festivals in Vermont and Connecticut kick off a busy season of steampunk events in the region | The Steampunk Explorer
Skip to main content

A Steampunk Autumn in New England 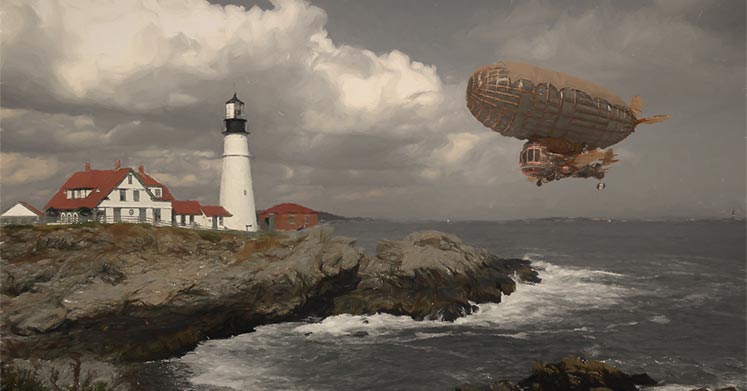 Steampunk fans in New England can look forward to an eventful autumn — in the literal sense of the term — as numerous events are scheduled from late September through December. The fun begins with steampunk gatherings in Vermont and Connecticut.

As always, you should check the event website or Facebook page in case of late changes or cancellations.

Photo courtesy of the Steampunk Society of Vermont.

Where: Multiple locations in Springfield, Vermont

This steampunk festival returns to Springfield, Vermont after being on hiatus in 2018. The theme this year is “The Kraken,” which will also encompass pirate lore. The program includes tea dueling, Splendid Teapot Races, the SteamWreck Fashion Show, and a series of panels hosted by circus sideshow performers Karnevil. Ryder Cooley and the Dust Bowl Faeries headline a musical lineup that also includes The Eternal Frontier, Indie Gomez, and the Shank Painters.

The Hartness House Inn, 30 Orchard St., will host live music, workshops, and panels. Vendors and artists will show their work at Riverside Middle School, which will also have a beer tent, food trucks, and kids’ activities. Additional activities, including workshops, will be hosted by businesses on Springfield’s Main Street. Shuttle buses will transport attendees between the locations.

The festival tickets will function as treasure maps that guide attendees to workshops around town. As they complete workshops, they’ll receive stickers that they can cash in for raffle prizes.

The event is produced by the Steampunk Society of Vermont. Adult tickets (ages 16+) cost $50. Kids 5 to 15 can attend for $25. Proceeds benefit the society’s scholarship program.

This will be the second annual steampunk fest at Roseland Cottage, a Victorian-era Gothic Revival mansion now operated as a museum by Historic New England.

The event will feature vendors, teapot racing, and a performance by Frenchy and the Punk. Tyra Penn and Her Army of Snakes is also performing. Guides in steampunk outfits will lead first-floor mansion tours. A crafts tent will offer activities for kids.

This gathering is part of Putnam’s First Fridays, a series of monthly festivals that run from May through October. The program includes a costume competition, Gadget and Gizmo Art Contest, creepy Halloween carols, and a Steam Music Pub Crawl. Steampunk maker Bruce Rosenbaum is the special guest speaker.

You can find additional details on the event’s Facebook page.

This festival is hosted by Citizens of Antiford, a group of steampunk enthusiasts that participates in events throughout New England. The program will include music, teapot racing, food, games, and vendors. Scheduled performers include The King Serpent Variety Troupe, The Shank Painters, and Karnevil. Admission costs $5 in advance and $8 at the door.

This will be the third edition of the steampunk festival, which takes place at multiple locations in downtown Attleboro. Activities will include panel discussions, live music, sword-fighting demonstrations, a Women at Work Museum, and an alternate reality game. Attleboro Jewelers will sponsor a downtown trolley.

The festival gets its name from Attleboro’s history as a center of jewelry manufacturing.

Leading up to the festival, the organizers have been presenting a series of smaller events dubbed “Five Months of Steampunk.” Next up is a “Fauxligraphy” class at the Attleboro Public Library, Thursday, Sept. 26, 6:30 to 7:30 p.m. Two days before the festival, the Attleboro Area Industrial Museum will host a “TinkerBots” make-and-take event.

Attendees are welcome to dress up as “their favorite author, character or thematic element.”

Attendees will participate in an interactive theatrical game that takes advantage of the setting, a 1920s-era mansion that’s now a tourist attraction. The immersive story, produced by Curious Experience Designs, revolves around Fulcrum Industries, a fictional manufacturer of machinery, airships, automatons, and fashion.

Fulcrum Industries shareholders are meeting at the estate to elect an executive director, “but this year there are other forces at play, from the grease monkeys feeding the boilers below to the domestic automatons watching from the sidelines,” the description says.

Participants will interact with actors portraying steampunk characters. They’ll be challenged to solve puzzles and make choices that guide the storyline.

The event was originally scheduled for July 12, but was postponed to Nov. 16. It’s hosted by Trustees of Reservations, the non-profit that owns and manages the estate.

The $55 admission fee includes light appetizers, beer, and wine. Admission is $44 for Trustees members. See the website and Facebook page for more info.

Tickets cost $30 in advance and $35 at the door. It’s $25 for kids, seniors, and society members. Proceeds benefit the society.

Looking farther ahead, the next Watch City Steampunk Festival is scheduled for May 9, 2020, in Waltham, Massachusetts. Presented by the Downtown Waltham Partnership, it’s one of the largest steampunk events in the U.S., drawing as many as 10,000 people. The organizers are currently accepting applications for vendors and performers. See the website for more info.

Correction: This story originally listed the date for the Machen Bachen festival as Oct. 12. It is scheduled for Oct. 5.