The Steampunk Art of Burning Man: Art first seen in Black Rock Desert lives on in other places, including an exhibition in Oakland | The Steampunk Explorer
Skip to main content

The Steampunk Art of Burning Man

Art first seen in Black Rock Desert lives on in other places, including an exhibition in Oakland 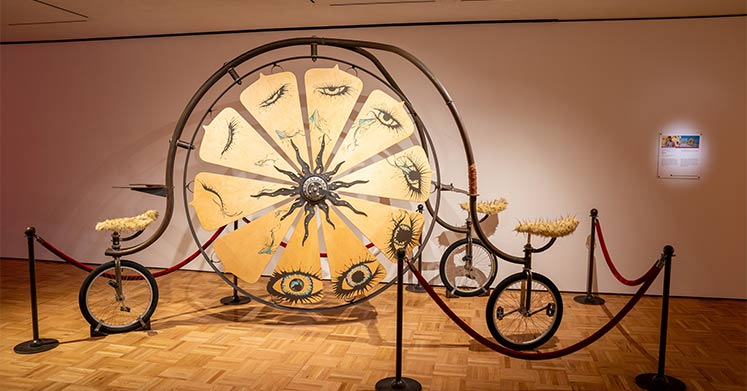 Evotrope by Richard Wilks. Photo courtesy of the Oakland Museum of California.

Burning Man is known for its spectacular art installations, including iconic steampunk wonders such as the Neverwas Haul and Nautilus Submarine Art Car. But you don’t have to spend a dusty week in Nevada’s Black Rock Desert to see Burning Man projects.

The Oakland Museum of California is currently hosting No Spectators: The Art of Burning Man, a traveling exhibition featuring works from the festival. Running through Feb. 16, 2020, it’s the third and final stop for the show, also seen earlier at the Cincinnati Art Museum in Ohio and the Renwick Gallery of the Smithsonian American Art Museum in Washington, DC.

Notable works in the exhibition include The Paper Arch by Michael Garlington and Natalia Bertotti; Evotrope by Richard Wilks; and Tin Pan Dragon by Duane Flatmo. Flatmo was also the creator of El Pulpo Mecanico, a giant fire-spewing mechanical octopus that appears to be inspired by steampunk. However, he told us he wasn’t aware of the genre when he conceived the project.

The museum is also hosting a companion exhibition, City of Dust: The Evolution of Burning Man, focusing on the history of the event.

Entry to No Spectators requires a timed ticket that can be ordered online in advance. The ticket includes admission to other museum galleries. Prices are $21 for adults, $16 for seniors, and $12 for kids ages 9 to 17.

Three works associated with the exhibition — David Best’s Temple of Reunion, Marco Cochrane’s Truth is Beauty, and Candy Chang’s Before I Die — are in outdoor spaces and can be viewed by the public during the museum’s operating hours.

Bay Area steampunk fans can also get a taste of Burning Man at Saturday’s Mad Hatter Holiday Festival and Parade at Unity Plaza in downtown Vallejo. Here you can see mutant vehicles such as Landau the Dragon, Chester the Horse, and Rhino Redemption, plus G-Nome, a five-foot tall gnome by Flaming Lotus Girls that shoots fire 30 feet into the air.

Unity Plaza is also the home of Soma, a 40-foot tall illuminated sculpture by Flaming Lotus Girls that represents the anatomy of neurons. First seen at Burning Man in 2009, it has been installed at Unity Plaza since 2016.

The festival was originally scheduled for Dec. 7 but was postponed to Dec. 14 due to stormy weather. It begins at 2 p.m., followed by the Mad Hatter Parade at 4:30 p.m. Joining the parade will be the art cars of Obtainium Works along with wacky vehicles by other makers. Obtainium Works is the Vallejo-based studio behind the Neverwas Haul and numerous other contraptions.

The Nautilus Submarine Art Car, seen at Maker Faire in 2015.

For years, folks who couldn’t make it to Black Rock Desert could count on seeing Burning Man projects at the Bay Area Maker Faire, the huge showcase for do-it-yourself ingenuity held each May in San Mateo, California. Sadly, the 2019 edition was likely the last, as event producer Maker Media closed its doors in June. The company was later revived in a smaller form as the Make Community, but it’s unlikely that we’ll see future Maker Faires on the same scale as the San Mateo event.

But Burning Man projects live on in other places. Flaming Lotus Girls has taken its installations to the Coachella Valley Music Arts Festival in Southern California and the Electric Daisy Carnival in Las Vegas. The Neverwas Haul, a three-story Victorian house on wheels, is on temporary display as part of a Burning Man exhibit at the Lyft Art Park in downtown Las Vegas.

Five Ton Crane, the studio behind the Nautilus Submarine Art Car, has found several homes for its works. Storied Haven, a fairytale house in a giant boot, currently resides at the Paradise Ridge Sculpture Garden in Sonoma County, California. The Raygun Gothic Rocketship can be seen at the Wings Over the Rockies Air & Space Museum in Lowry, Colorado. And the Steampunk Tree House now stands at the Dogfish Head Brewery in Milton, Delaware.

The Nautilus is a 25-foot long art car modeled after the submarine from Disney’s film adaptation of 20,000 Leagues Under the Sea. It was built on commission for Christopher Bently, a Bay Area businessman and philanthropist who once served on the board of directors for the Burning Man Foundation. He leads the Bently Foundation, which provided funding for the Oakland museum’s exhibition.

See the gallery below for works from the exhibition as well as other notable Burning Man projects.