From the Kitchen of H.P. Lovecraft: A richly illustrated cookbook features food and drink recipes inspired by the horror author | The Steampunk Explorer
Skip to main content

From the Kitchen of H.P. Lovecraft 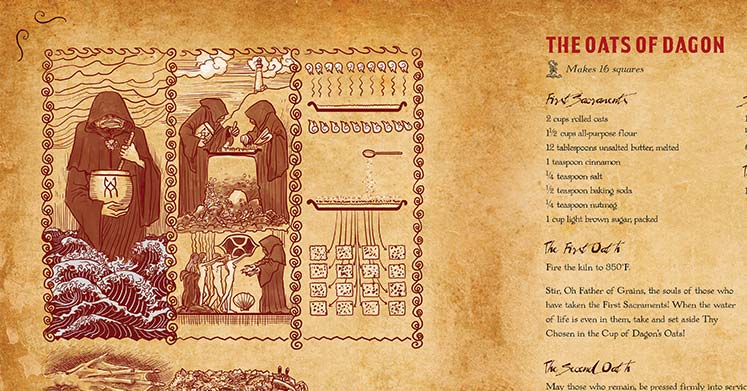 Excerpted from The Necronomnomnom: Recipes and Rites from the Lore of H.P. Lovecraft. Copyright 2019 by Red Duke Games. Reproduced by permission of The Countryman Press. All rights reserved.

Just in time for Halloween, The Countryman Press has released The Necronomnomnom, a book of “recipes and rites from the lore of H.P. Lovecraft.” Written by Lovecraft fan Mike Slater, it reveals the long-lost mysteries behind concoctions such as “The Custard Out of Space,” “New England Damned Chowder,” and “Gin and Miskatonic.” Yes, the only things more horrid than the mind-destroying monsters are the unspeakable puns.

These are real dishes that you can prepare in your kitchen and presumably eat or drink, though I haven’t tested any for myself.

I received an advance copy from a publicist, and I can attest that it is a handsome volume, with a beautiful embossed cover and copious illustrations by Kurt Komoda.

You can get a sense of the literary style from these instructions for “Martini: Shaken, Not Hastur”: “Under chill Aldebaran, by the shore of the Lake of Hali (ideally), combine the two spirits. The vessel must be strong enough to contain the inevitable clash between the two. Shake violently, and strain.”

Some recipes are written in verse, like this passage from “The Side Dish Not to Be Named”:

In a skillet heat one measure of oil

Take thee care it should not boil

And to translucence closer

Nutmeg too, till spinach wilts like skin of leper

In some cases, you may want to substitute ingredients. For example, the recipe for “Albino Penguin au Vin Blanc” helpfully informs you that “meat of the common chicken will do.”

The book has 50 recipes in all, divided into sections for Drinks, Appetizers, Soups and Salads, Main Dishes, Sides, Breakfast, Children’s Meals, and Desserts. The Appendix (“The Rites Revealed”) repeats the recipes in plain English.

The author ran a Kickstarter campaign for the book in 2017, raising more than $80,000. Now he’s planning to raise funds for his next book: Unspeakable Carols - A Tome of Lovecraftian Holiday Hymns and Cthulian Canticles.

The cookbook is available now in digital and hardcover formats. The latter retails for $24.95. If you’re a Lovecraft fan, this is one you’ll want to own in hardcover. You can learn more on the W.W. Norton website.

A few of the recipe pages are shown the gallery below.

The Steampunk Explorer is on Patreon. A monthly pledge of $1 or more supports our work and provides access to premium content. Get the details here.